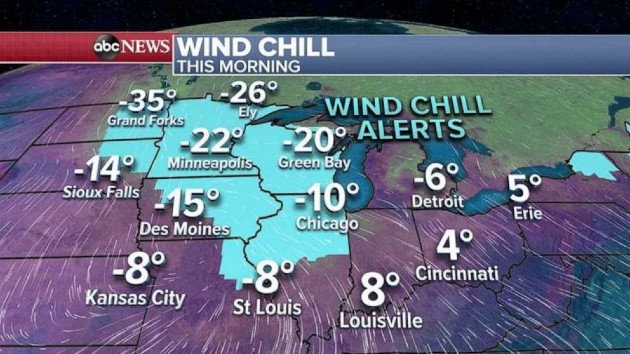 ABC News(NEW YORK) — On Valentine’s Day, the coldest weather of the season is moving from the Midwest into the Northeast. So far, the coldest temperatures have been in western Minnesota and eastern North Dakota. In Waukon, Minnesota, the actual temperature fell to -37 degrees this week. The coldest wind chill has been in North Dakota, where it has dropped to as low as -50 degrees.Temperatures in Minneapolis fell to -11 degrees on Thursday and Friday, making it the coldest temperature there to date this winter season. Chicago fell to zero degrees Friday morning, making it the coldest temperature in the Windy City this winter season. Twelve states from the Dakotas to Maine are under wind chill alerts Friday. Wind chills are in the -30s and -20s below zero in the Upper Midwest and western Great Lakes. With frigid air moving into the Northeast Friday and Saturday morning, expect temperatures to get close to the coldest readings so far this season.In Boston, if temp falls below 14 degrees, it will be the coldest of the season. The forecast calls for temps to reach 6 degrees. If temperatures fall below the forecasted 16 degrees Friday in New York City, it will be the coldest of the season for the Big Apple. This winter, Philadelphia’s coldest temperature so far is 19 degrees, but the forecast for Friday calls for 13 degrees.The cold blast and frigid wind chills will not last long. By Saturday, Chicago rebounds above freezing and is near 40 degrees by Sunday. Boston, Philadelphia and New York City bounce right back to near 50 degrees by Sunday. Copyright © 2020, ABC Audio. All rights reserved.

Pompeo accuses China and Iran of censoring information about coronavirus outbreaks
Donald Trump accuses Supreme Court justices of bias in 1st direct attack as president
Both GOP and Democratic lawmakers slam Trump admin as unprepared for coronavirus
Bloomberg campaign signals renewed focus on Democratic front-runner Bernie Sanders ahead of SC primary
Singer Duffy says she was ‘raped and drugged and held captive’
“I’m not a huge fan of the genre”: Don’t expect to see Liam Neeson in any other superhero movies