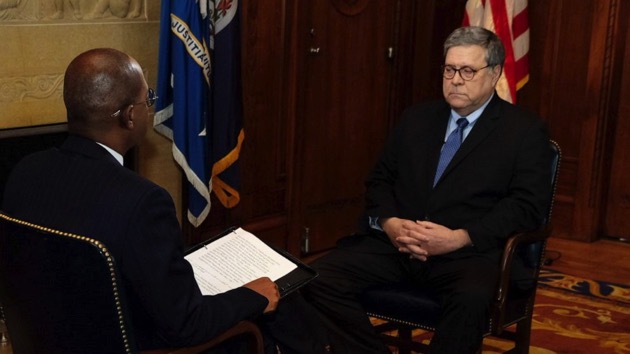 Jack Date/ABC News(WASHINGTON) — President Donald Trump on Friday morning broke almost 17 hours of silence following ABC News’ exclusive interview with Attorney General Bill Barr, pushing back on Barr’s warning not to interfere in criminal cases, insisting he has the “legal right” to do so.Trump repeated what he’s said previously — including just this past Tuesday — that he has the “absolute” right to comment on how the Justice Department is handling criminal cases, including those involving his friends and associates.“’The President has never asked me to do anything in a criminal case,’” Trump tweeted, quoting Barr. “This doesn’t mean that I do not have, as President, the legal right to do so, I do, but I have so far chosen not to!”

“The President has never asked me to do anything in a criminal case.” A.G. Barr This doesn’t mean that I do not have, as President, the legal right to do so, I do, but I have so far chosen not to!

As questions loomed about whether Trump’s complaints about the seven-to-nine years sentence career prosecutors recommended for longtime friend and former campaign adviser Roger Stone caused Barr to intervene and push for a more lenient prison term, the attorney general told ABC News Chief Justice Correspondent Pierre Thomas on Thursday that the president “has never asked me to do anything in a criminal case.””To have public statements and tweets made about the department, about our people in the department, our men and women here, about cases pending in the department, and about judges before whom we have cases, make it impossible for me to do my job,” Barr said.

“I’m not going to be bullied or influenced by anybody….whether it’s Congress, newspaper editorial boards, or the president," Bill Barr tells @ABC News."I cannot do my job here at the department with a constant background commentary that undercuts me.” https://t.co/14rnEMD65c pic.twitter.com/QuoTgpUVHp

The Justice Department did not immediately respond to an ABC News request for comment.Barr’s interview comments were a rare break with a president who the attorney general has aligned himself with and fiercely defended. But it also puts Barr in line with many of Trump’s supporters on Capitol Hill who say they support the president but wish he’d cut back on his tweets.In the ABC News interview, Barr characterized Trump’s comments as “disruptive” and “background commentary that undercuts me.”Speaking on Fox News Thursday night, Senate Majority Leader Mitch McConnell said, “I think the attorney general knows what he’s talking about. I’m not the attorney general but I have confidence in Bill Barr. I think he’s doing a good job and I think he’s told the president, this is not helpful, making it difficult for him to do his job. I think the president will listen to him.” Copyright © 2020, ABC Audio. All rights reserved.