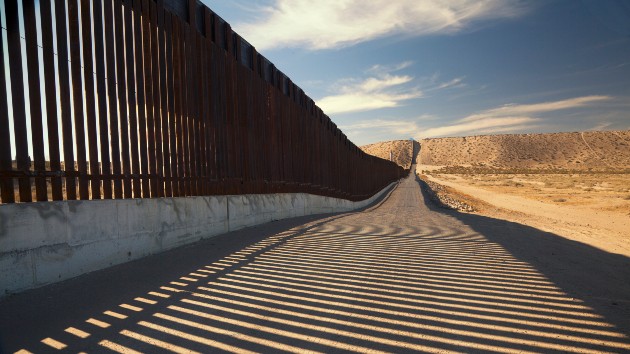 ElFlacodelNorte/iStock(WASHINGTON) — The Pentagon will once again shift billions of dollars in its accounts in order to fund hundreds of miles of new border wall at the request of the Department of Homeland Security, a move that mirrors actions taken last year to help the Trump administration build sections of the wall along the U.S.-Mexico border.Around $3.8 billion will be transferred from existing Defense Department funds into a counter-narcotics account that will then be used to build 177 new miles of border wall in federally controlled land along the four southwestern border states, according to officials.”The Secretary of Defense has made a decision today to support the DHS’ support for assistance that the department received on Jan. 15,” Robert Salesses, the deputy assistant secretary of defense for Homeland Defense Integration, told a small group of Pentagon reporters on Thursday.Salesses added, “The DHS request specifically identified the need for fences, roads and lighting” along key lanes along the border used by Mexican drug cartels to smuggle drugs across the border.New construction of 177 miles of new border wall will occur near San Diego and El Centro, California; Yuma and Tucson, Arizona; and El Paso and Del Rio, Texas.Salesses told reporters that under existing authorities, DoD would “reprogram” or shift $3.8 billion in funding allocated by Congress for use in fiscal year 2020 into the counter-narcotics account known as section 284.The Pentagon’s move partially meets a DHS request for assistance received in January that asked for $5.5 billion in Defense Department funding to help construct 271 miles of border.Documents provided to Congress on Thursday indicate the funds will come from purchases of aircraft and replacement equipment for the National Guard and ReservesLast year, the Pentagon shifted $6.1 billion from existing accounts to meet DHS requests to help fund construction of the border wall.Then, $2.5 billion was shifted in to the counter-narcotics fund and an additional $3.6 billion was diverted from existing military construction projects to help pay for the border wall — funding known as section 2808.No funding for domestic military housing projects was diverted to the wall, instead the Pentagon delayed more than a hundred overseas construction projects and shifted money from projects that had not yet been contracted out for future construction.While no decisions have been made about additional funds being used from other military construction projects, Salesses confirmed that there are ongoing discussions about the possibility.”We have significant challenges on the border for the U.S. on the southwest,” Salesses told reporters. “And the ability to do something about that effectively will make a huge impact on the security for this nation. “But the Pentagon’s announcement was met with bipartisan criticism on Capitol Hill.”The re-programming announced today is contrary to Congress’s constitutional authority, and I believe that it requires Congress to take action,” Rep. Mac Thornberry, the top Republican on the House Armed Services Committee, said in a statement. “I will be working with my colleagues to determine the appropriate steps to take.”Thornberry added, “The wall should be funded, but the funding must come through the Department of Homeland Security rather than diverting critical military resources that are needed and in law.” Vermont Sen. Patrick Leahy, the top Democrat on the Senate Appropriations Committee called the wall a “vanity” project.”Time and again, this President has subverted that constitutional authority and bipartisan majorities of Congress to pay for his vanity wall,” Leahy said in a statement, adding, “Let us see whether congressional Republicans will brush off this diversion of funds from military programs that they support, or continue the inaction that has led this President to become increasingly brazen.”Salesses said that the Pentagon could not meet all of Homeland Security’s request because of the terrain in some of the border areas and other factors like the “ability to execute the construction within the time frame that the funding’s allocated would not be met this year.”He said he didn’t anticipate that there would be another DHS request for funding this year — and some lawmakers are questioning the administration’s push for more funds.”The Trump Administration claims that every military decision they make is in support of the National Defense Strategy … But their policy simply does not match their rhetoric,” House Armed Services Committee Chairman Adam Smith, D-Wash., said in a statement. “Rather than investing in the procurement of critical platforms, this administration would rather dump another $3.8 billion into a wall on our southern border.”No military personnel will be involved in the construction of the new wall. Instead, as has happened before, the U.S. Army Corps of Engineers will contract construction projects to civilian contractors.According to Customs and Border Protection, since 2017, the Trump administration has secured $11.1 billion in funding for border wall construction that will be used for about 570 miles of wall construction.The vast majority of work along 110 miles of the border has focused on replacing old designs with larger steel structures, access roads and surveillance systems.But, CBP says only about one mile of new barriers have been built where none existed before. Copyright © 2020, ABC Audio. All rights reserved.

Both GOP and Democratic lawmakers slam Trump admin as unprepared for coronavirus
Judge expresses concern for Stone juror’s safety as Trump continues attacks
US Navy’s 7th Fleet to screen all personnel boarding ships for coronavirus
Pompeo: US, Taliban deal ‘historic opportunity for peace,’ but women’s rights up to Afghans
Petition for airlines to seat families together for free takes off
Dow Jones plunges for 2nd straight day on coronavirus fears