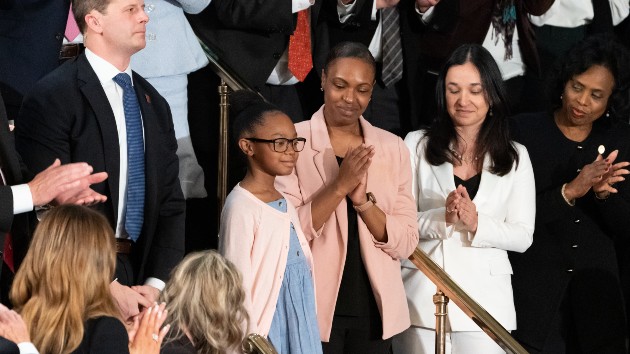 Official White House Photo by Andrea Hanks(WASHINGTON) — Among the guests at President Donald Trump’s State of the Union address was a fourth grader from Philadelphia, Janiyah Davis, sitting alongside her mother, Stephanie Davis, in the House gallery, watching from above.At one point, he talked about his campaign issue that there should be “choice” in education.”For too long, countless American children have been trapped in failing government schools,” Trump said. Then, in a moment that took the Davis family by surprise, the president announced that Janiyah would receive a scholarship to the school of her choice.“The programs are so popular that tens of thousands of students remain on a waiting list. But Janiyah, I have some good news for you because I’m pleased to inform you that your long wait is over,” Trump said.“I can proudly announce tonight that an opportunity scholarship has become available, is going to you and you will soon be heading to the school of your choice,” he said, as the president’s supporters in the chamber began applauding.But Janiyah already attends one of the most exclusive charter schools in Philadelphia, according to the Philadelphia Inquirer.Davis was one of 900 students selected from an application pool of 6,900 that MaSTIII received last year, according to the Inquirer. The charter school is run independently, but funded by taxpayers, making it tuition-free, a school official confirmed to ABC News.According to the newspaper, Davis’ mother was contacted by the White House through the private school Janiyah previously attended, Olney Christian. Davis was on a partial scholarship at Olney Christian in Philadelphia until she was accepted into MaSTIII.“I don’t view MaST as a school you want to get out of at all. I view it as a great opportunity,” Davis told the Inquirer.The CEO of MaST Community Charter Schools, John Swoyer told ABC News the school focuses on science, technology, robotics, engineering, arts and math, which creates a school that “engages students through both academic and social opportunities, and focuses on the use of innovation and technology to spark the minds and interests of our students.”When Trump’s State of the Union guests were announced before the speech, the White House published details about Janiyah’s situation on its website.“She loves art and math, but for too long she has been assigned to low-performing schools,” the White House said about Janiyah.They also described Stephanie Davis as a hardworking, single mother who had tried to “apply for a tax credit scholarship.”School choice is a contentious issue on Capitol Hill with many Democrats highly critical, claiming it hurts public schools. Some conservatives agree.The Trump administration recently unveiled the Education Freedom Scholarships, which could create up to $5 billion in scholarships for school choice.Education Secretary Betsy DeVos is a known proponent of school choice. DeVos personally funded the scholarship for Janiyah, according to a Department of Education spokesperson.The White House House did not immediately respond to a request for comment. Copyright © 2020, ABC Audio. All rights reserved.