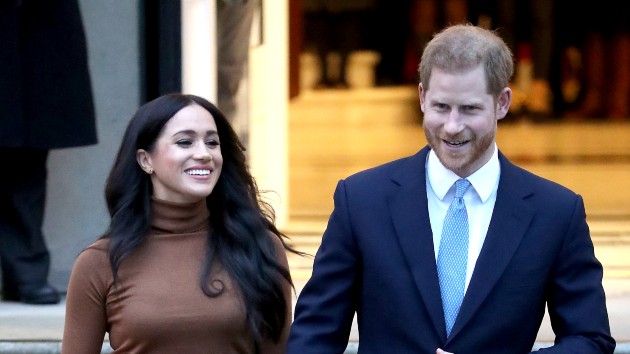 Chris Jackson/Getty Images(LONDON) — Being royalty is usually a lifetime role, not one that comes with start and end dates. However, an end date as working members of Britain’s royal family is set for Prince Harry and Meghan, the Duke and Duchess of Sussex. Harry and Meghan’s last day as working members of Britain’s royal family will be March 31, a spokesperson for the Sussexes confirmed Wednesday.The couple’s office at Buckingham Palace, their headquarters for the past year, will be closed the next day, April 1. Going forward, Harry and Meghan will be represented through their charity, according to the spokesperson. The end date marks a new chapter for Harry and Meghan, who announced last month their intention to step back as “senior members” of the royal family and to spend time outside the U.K.Under guidelines announced in January by Buckingham Palace, Harry and Meghan will retain but no longer use their HRH titles, will no longer represent Her Majesty, will not receive public funds for royal duties and will spend the “majority of their time” in North America. The Sussexes recently traveled to Miami and San Francisco for meetings but have been staying in Canada with their infant son Archie as they plan their next chapter.The terms of Harry and Meghan’s split from the royal family will be reviewed in one year, according to the spokesperson, who explained, “As there is no precedent for this new model of working and eventual financial independence, the Royal Family and the Sussexes have agreed to an initial 12-month review to ensure the arrangement works for all parties.” A major focus of Harry and Meghan’s post-royal work will be their new non-profit organization. The couple will continue to focus on causes important to them, including “the Commonwealth, community, youth empowerment and mental health, collectively,” according to their spokesperson.What is not yet known is what the couple will name their nonprofit. Harry and Meghan had used the same Sussex Royal branding they have also used on their @SussexRoyal Instagram account and SussexRoyal.com website. With their new roles outside the royal family, Harry and Meghan may be asked by royal officials to drop the word “royal” from their Sussex Royal brand.The couple’s spokesperson confirmed Wednesday that “discussions are still ongoing.” “As The Duke and Duchess are stepping back as senior Members of the Royal Family, and will work towards financial independence, use of the word ‘Royal,’ in this context, needed to be reviewed,” the spokesperson said in a statement. “Discussions are still ongoing, however, a change will be announced alongside the launch of their new non-profit organisation.” Another new detail is that Prince Harry and Meghan plan to return to the U.K. and hold engagements there before their final day in March. The couple spent an extended holiday break on Vancouver Island and have remained there with Archie for most of the past two months.Meghan’s last royal engagement in the U.K. was on Jan. 7, when she and Harry visited Canada House, just one day before they dropped their bombshell announcement. Harry’s last U.K. engagement was on Jan. 19, when he delivered emotional remarks at a benefit for his Sentebale charity. Harry is expected to make an appearance in the U.K. at the end of February. The couple have several U.K.-based events on their schedules in March. Copyright © 2020, ABC Audio. All rights reserved.