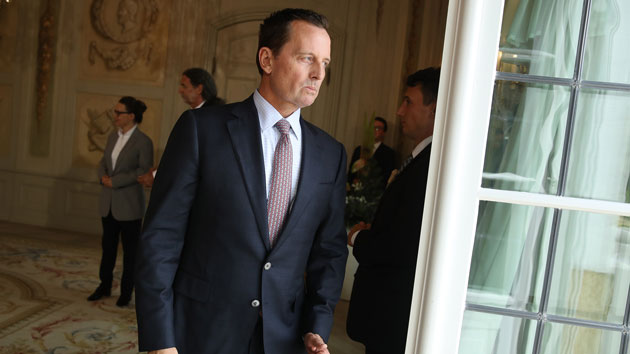 Sean Gallup/Getty Images(WASHINGTON) — President Donald Trump has named Richard Grenell, the current U.S. ambassador to Germany, to be the acting director of national intelligence.Trump posted the announcement on Twitter, and also thanked Joseph Maguire who has been serving as the acting DNI since Dan Coats resigned Aug. 15.

….for the wonderful job he has done, and we look forward to working with him closely, perhaps in another capacity within the Administration!

In the tweet, the president also said Maguire may serve in another capacity within the administration.The 53-year-old is a staunch Trump supporter who has served as ambassador in Berlin since May 8, 2018. He was confirmed by the U.S. Senate in a 56-42 vote on April 26, 2018.Grenell will become the first openly gay member of the cabinet. The Michigan native is also a former spokesman at the United Nations and worked on the 2012 presidential campaign of Sen. Mitt Romney, R-Utah.According to ABC News’ records, on Sept. 14, 2019, Grenell joined the president at the White House for dinner with Fred and Cindy Warmbier, whose son Otto died shortly after being released from captivity in North Korea in June 2017.Grenell received a master’s degree in Public Administration from Harvard University and completed a bachelor degree at Evangel University in Springfield, Missouri, according to his biography posted on the State Department’s website.Copyright © 2020, ABC Audio. All rights reserved.

Acting Navy secretary resigns after carrier remarks, Esper names replacement
Judge rejects R. Kelly’s request to be released from jail over coronavirus fears
Disaster in motion: Where flights from coronavirus-ravaged countries landed in US
1st federal inmate dies in prison hit hard by coronavirus after heartbreaking plea to judge
Crime victim calls it a ‘slap in our faces’ as violent offenders are released from Rikers over COVID-19 concerns
Acting Navy secretary submits resignation after carrier remarks