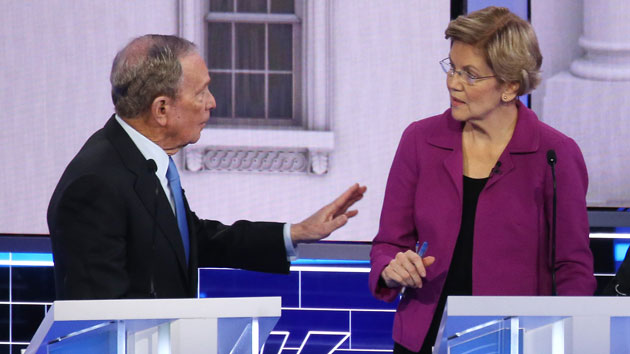 Mario Tama/Getty Images(LAS VEGAS) — During his debut on the Democratic debate stage in Nevada on Wednesday night, former New York City Mayor Michael Bloomberg was confronted by Sen. Elizabeth Warren about his alleged history of making crude and degrading comments toward women.”I’d like to talk about who we’re running against,” Warren said. “A billionaire who calls women fat broads and horse-faced lesbians, and no I’m not talking about Donald Trump, I’m talking about Mayor Bloomberg.”Under pressure, Bloomberg reverted to a well-worn line of defense, dismissing his past language as a “joke.”“None of [the women] accused me of doing anything, other than, maybe, they didn’t like a joke I told,” Bloomberg replied, echoing comments he made on “The View” last month, when he said, “Did I ever tell a bawdy joke? Yeah, sure, I did. And do I regret it? Yes, it’s embarrassing, but, you know, that’s the way I grew up.”But for some women who might wish to speak publicly about that conduct, now that he’s running for President of the United States, the consequences could be deeply serious. As Bloomberg has downplayed the nature of the allegations against him and his company, those who leveled allegations against him who are subject to a confidentiality agreements could face potentially significant financial exposure if they decided to speak.Several women have entered into strict non-disclosure agreements with Bloomberg’s company in connection to a slew of gender discrimination and sexual harassment lawsuits, detailing decades worth of allegations that Bloomberg personally directed crude and sexist comments to women in his office.One confidential settlement agreement negotiated by Bloomberg’s company and obtained by ABC News reveals, the plaintiff was asked to agree not to “in any way disparage” Bloomberg’s company. If asked about the agreement, the person is advised to say “the parties reached an amicable resolution of this dispute … but should not comment further on their settlement.”Bloomberg and his company have so far resisted calls – most notably from Sen. Warren – to release those women from those agreements. On Wednesday, Bloomberg even implied that the women subject to the privacy agreements wanted to continue to abide by them.But ABC News has spoken with several women who expressed interest in telling their stories, but feared the prospect of retribution from the company, including significant financial losses for violating the terms of their confidentiality agreement by speaking out.Donna Clancy, an attorney for three former employees who have sued both Bloomberg and his firm, said if the women were to break their NDAs, the “terms and conditions say that they would suffer the consequences.”In response to criticism, Bloomberg has defended his company and its culture.“Not everybody’s happy, but we have an enviable record of treating people the same in terms of compensation and promotions and authority,” Bloomberg told ABC in December. “And there will always be somebody that’s not happy, but we are, we do very well in terms of attracting men and women to come to work in the company, and the retention rate with both of them is good as I think any real company. So, I’m very proud of what we do.”Here is a breakdown of what we know:

Court records reviewed by ABC News indicate that at least 17 women have taken legal action against the company over the past three decades, with three of the cases specifically naming Bloomberg for his role in the company’s culture. None of the cases made it to trial – four were either dismissed or withdrawn, while five were settled out of court. Three cases remain active.
While many of the cases brought against Bloomberg’s company over the years have taken aim at other managers and executives, several of the early complaints alleged Bloomberg’s attitude and statements about women fostered a hostile work environment himself. Some were dismissed, while others were settled with no admission of wrongdoing.
In 2007, the Equal Employment Opportunity Commission (EEOC), a federal agency that polices workplace harassment and discrimination, brought a sweeping case alleging discrimination against pregnant woman and new mothers who worked at the firm. Sixty-seven women were prepared to join the case. The time period of the misconduct alleged in the lawsuit was between 2002 and 2007 while Bloomberg was mayor of New York City and not involved in the day-to-day operations of the company, although he remained the majority owner of it. A court dismissed the case in 2011.

And here is a selection of crude comments attributed to Bloomberg:

One legal complaint filed in the 1990s claimed that Bloomberg told an employee who had just announced she was pregnant to “kill it.” “He told me to ‘kill it’ in a serious monotone voice,” the woman alleged in a lawsuit. “I asked ‘What? What did you just say?’ He looked at me and repeated in a deliberate manner ‘kill it.'” Bloomberg has repeatedly denied that specific allegation, which arose in a discrimination lawsuit that was settled out of court.
Other quotes attributed to him in court filings include “I’d like to do that piece of meat” and “I would DO you in a second.”
In another case, he is alleged to have told a female employee, regarding her boyfriend: “Keep him happy with a good [oral sex].”
At a 1996 dinner party, he is alleged to have announced to a table of colleagues, “I’d love nothing more in life than to have Sharon Stone sit on my face.”

“The atmosphere was toxic and harassing,” said Bonnie Josephs, a New York attorney who represented the woman who alleged that Bloomberg suggested she terminate her pregnancy. “It’s his company, it’s his business. He frames the atmosphere. He has to be responsible for it. … If Mr. Bloomberg is running for president, I think the public needs to know what actually happened in this business.”
“We have investigated the company for the last four years, and the culture is such that women are not valued,” said Clancy, an attorney for three former employees who have sued both Bloomberg and his firm. “In fact, they’re objectified, based upon the complaints that I’ve filed on behalf of three plaintiffs and the history that’s listed in those complaints.”

This isn’t the first time Bloomberg has faced scrutiny for his past conduct on the campaign trail- or the first time he has trivialized that conduct as “a joke.” While running for mayor of New York City in 2001, Bloomberg was asked about a 32-page gift booklet of his “wit and wisdom,” compiled and given to him by friends and colleagues for birthday, that was full of crude and sexist comments Bloomberg had allegedly made.“If women wanted to be appreciated for their brains, they’d go to the library instead of to Bloomingdales,” reads one comment in the book.At the time, Bloomberg both denied making the comments in the book and dismissed them as “a bunch of gags” anyway.”This was a book that was given to me as a joke 10 years ago at a party,” Bloomberg later stated on the debate stage in 2001. “I probably never saw it after that. It’s a bunch of Borscht Belt jokes that somebody had put together. It does not reflect my views back then, or now.”Copyright © 2020, ABC Audio. All rights reserved.

1,300 NYC first responders back at work after recovering from coronavirus or its symptoms
Judge rejects R. Kelly’s request to be released from jail over coronavirus fears
Disaster in motion: Where flights from coronavirus-ravaged countries landed in US
Crime victim calls it a ‘slap in our faces’ as violent offenders are released from Rikers over COVID-19 concerns
Ryan Reynolds tweets “weirdly appropriate” scene from ‘Free Guy’, given COVID news cycle
As flights are canceled amid coronavirus, officer sues United Airlines for refund