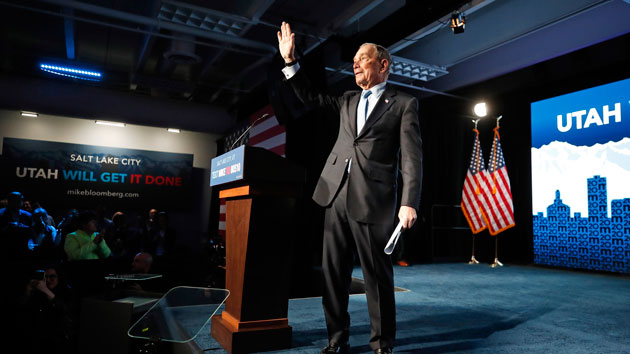 George Frey/Getty Images(CHARLESTON, S.C.) — Former New York City mayor Mike Bloomberg is preparing to aggressively target Sen. Bernie Sanders during Tuesday’s primary debate in South Carolina — an effort to dislodge the Democratic front-runner and steady his own half-a-billion-dollar campaign before he first appears on primary ballots next week.With aides warning that Sanders, who leads the Democratic field after the first three primary contests, could be on his way to an “insurmountable” delegate lead after Super Tuesday, Bloomberg has opened up several lines of attack on the Vermont independent, knocking his record on gun control and recent praise for elements of the late Cuban dictator Fidel Castro’s communist regime.”He needs to flip the argument and force Bernie on the defensive,” Hank Sheinkopf, a Democratic consultant who has worked for and against Bloomberg in the past, told ABC News. “The more blood on the stage from others and not Bloomberg, the better he’ll be.”In a call with reporters on Monday, Dan Kanninen, Bloomberg’s states director, said Sanders’ record on gun control was “disqualifying” and out of step with primary voters, warning that his nomination would be a “fatal error” that could hurt down-ballot Democrats who need the support of moderate and independent voters.In recent days, the campaign has also shifted strategy in its efforts to stall the senator’s momentum after his victory in Nevada. ABC News reviewed a copy of its latest ammunition — a poll conducted for the campaign — with questions designed to emphasize to respondents an association between Sanders and socialism. The campaign has been sharing the results, which ABC News does not consider airworthy, with House Democrats who are facing challenging re-election races in 2020.The line of questions follows a pattern of attacks the Bloomberg campaign has lobbed against Sanders, as they claim his nomination would negatively impact down-ballot races.In one line of questioning, respondents were asked to read a statement allegedly “made by opponents” of the senator before answering whether or not they’d lean in favor of Sanders or President Donald Trump.”It’s important for us to understand that if we choose a candidate in this critical election, who appeals to a small base, like Sen. Sanders, it would be a fatal error against a candidate as strong as Donald Trump,” Kanninen told reporters.The Bloomberg campaign also released a digital ad calling Sanders “beholden” to the National Rifle Association, which endorsed him in his 1990 House race.It criticized Sanders’ votes against expanding background checks and waiting periods in the 1990s, and for a 2005 Senate proposal shielding gun manufacturers from lawsuits.Sanders has since toughened his positions on gun control, and more recently voted to expand background checks, ban assault weapons and high-capacity magazines.Bloomberg, who has poured millions into gun control efforts in states across the country and launched nationwide advocacy groups Moms Demand Action and Everytown for Gun Safety, is aiming to distinguish himself from Sanders and the rest of the field on the topic, which did not come up during last week’s debate in Nevada.”They all talk about it,” Bloomberg said about gun control in an interview with Rev. Al Sharpton on MSNBC last week. Talking about his campaign, he added, “We’ve actually done something about it.”Bloomberg, along with former Vice President Joe Biden, has also criticized Sanders for comments about Castro.On Monday, Sanders condemned Cuba’s “authoritarian” record, but also said “it’s unfair to simply say everything is bad,” in an interview with CBS News’ “60 Minutes.””When Fidel Castro came to office, you know what he did? He had a massive literacy program. Is that a bad thing? Even though Fidel Castro did it?” he said, comments that Bloomberg quickly seized on.The former mayor tweeted out a list of things he called Fidel Castro’s “dark legacy,” adding “But sure, Bernie, let’s talk about this literacy program.”His campaign also posted a series of satirical tweets featuring made-up quotes of Sanders praising autocrats and dictators, but quietly deleted the messages Monday night without explanation.Sanders defended his comments in a CNN town hall Monday evening, and his campaign compared the comments to remarks former President Obama gave in a 2016 speech in Havana about education and health care in communist Cuba.Bloomberg has spent the last few days getting ready for the debate, according to his campaign, who said they asked CNN to reschedule a Monday town hall to Wednesday night, leaving more time for his preparations.”We feel much more confident going into this next debate, having been through it,” Kanninen told reporters on Monday’s call. “You can’t overstate what it’s like to be on that stage, having not done that in quite some time.”He’s also taken other steps to respond to criticisms of last week’s performance.After facing attacks from Massachusetts Sen. Elizabeth Warren about nondisclosure agreements signed by women at his company, Bloomberg said he would release women who signed three NDAs.He said in a statement that they were the only agreements over “30-plus years with women to address complaints about comments they said I had made.”  Copyright © 2020, ABC Audio. All rights reserved.