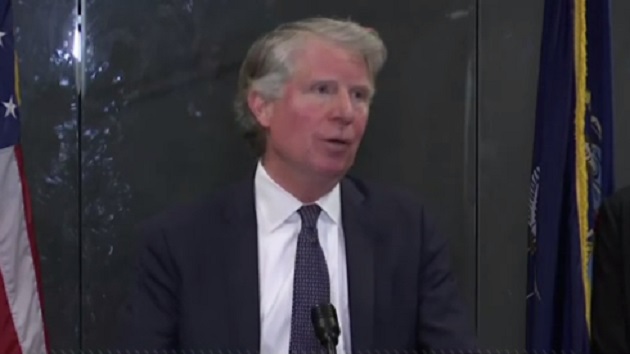 ABC News(NEW YORK) — The conviction of Harvey Weinstein busted myths about rape and should encourage more people to report sexual assault, Manhattan District Attorney Cy Vance told ABC News.Vance’s office successfully prosecuted Weinstein for forcing a sex act on production assistant Miriam “Mimi” Haley and raping aspiring actress Jessica Mann, despite complicated testimony and a lack of forensic evidence. His attorneys have said they will appeal the decision.”The survivors were believed by the jurors,” Vance said. “The case has been very visible and therefore will reach a lot of survivors of sexual assault and hopefully influence them to step forward.”Weinstein was spared the possibility of a life sentence when he was acquitted of predatory sexual assault, based on the testimony of “Sopranos” actress Annabella Sciorra.Vance said he had no regrets about adding the predatory sex assault charges to the indictment.”It was bold and courageous of Annabella to testify in this case, and the fact that the jurors did not convict on her count is not a loss,” Vance said, noting the 5 to 25 years Weinstein faces when he is sentenced in March.”The range that he’s now facing is significant, particularly given his age,” Vance said.In a statement, Sciorra called her testimony painful but necessary.”I spoke for myself and with the strength of the eighty plus victims of Harvey Weinstein in my heart. While we hope for continued righteous outcomes that bring absolute justice, we can never regret breaking the silence,” Sciorra’s statement said.Weinstein pleaded not guilty to all charges and has claimed any sexual encounters were consensual.The district attorney told ABC News he hoped the case signaled a new era in the criminal justice system because he said the case shattered “myths” about sexual violence.”Myths like rape only occurs by someone you don’t know or in some dark alley, that rape doesn’t occur when someone in the workplace takes advantage of a subordinate,” Vance said. “They believed that Miriam Haleyi was sexually assaulted by Harvey Weinstein notwithstanding the fact that she had subsequent communication with his office.”Vance had become the subject of protests after he declined to prosecute Weinstein in 2015 for groping an Italian model, a decision that received fresh criticism when a torrent of women began to accuse Weinstein in 2017.”We did not know in 2015 all the information that later came about to became known about Harvey Weinstein,” Vance told ABC News. “There was a lot of information was available to us that’s not made public that would have been very relevant for the trial.”He resisted any suggestion that bringing the current case was meant to absolve the earlier decision or burnish his legacy.”The outcome here with this conviction is gratifying because I think it validates our decision and our risk, and there was risk in taking this case, but it’s not a decision that I made thinking about what people would think of me five, 10, 15 years from now,” Vance said. “It just wasn’t.”