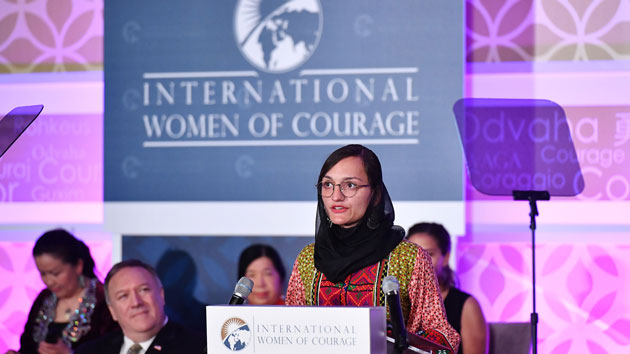 MANDEL NGAN/AFP via Getty Images(WASHINGTON) — At 26 years old, Zarifa Ghafari is one of Afghanistan’s youngest mayors. That would be an accomplishment alone, but Ghafari is also one of Afghanistan’s first and only female mayors — in charge of the capital city of Wardak province, a stronghold of Taliban support and conservative belief.On her first day in office, a mob of men protested, forcing her to flee: “They thought that was the end of that, but I came back. I came back, and I stood my ground,” she said to cheers and applause at the State Department on Wednesday.Ghafari was one of 12 women honored by the Trump administration with the International Women of Courage award, an annual ceremony started by Secretary of State Condoleezza Rice in 2007.The honorees this year are an impressive list: Amaya Coppens, a Nicaraguan student activist who was freed from detention just this December; Amina Khoulani, a Syrian advocate imprisoned by the Assad regime, whose three brothers were killed in regime custody; and Sayragul Sauytbay, an ethnic Kazakh Muslim who was held in China’s detention camps in Xinjiang and became one of the first to tell the world of those horrors.Ghafari was the only honoree to speak during the ceremony Wednesday and she used her remarks to make a direct plea to Secretary of State Mike Pompeo, seated just feet from her.”Let me ask for your continued support to ensure that Afghan peace process does not erase the gains that have been made since the dark days of the Taliban regime,” she said, turning to face Pompeo, who joined the audience in applauding.Ghafari thanked the U.S. and Afghan governments for “standing with our women,” but she added, “Women of my generation have not forgotten the reign of the Taliban, and we are as always worried for the future.”‘You are failing us’: Teen climate change activist gives a passionate speech at the UNThe agreement signed between the U.S. and the Taliban Saturday does not lay out what kind of government the U.S. will leave Afghanistan with, let alone ensuring protection for women or minorities, or even the existing constitution.U.S. officials, including Pompeo, have said that is up to the Afghan people to decide during the peace negotiations the deal says will take place on March 10. The Afghan government has said women will be part of their negotiating team, which has not yet been named.”Women are a central part of that. Women will be certainly there,” Ambassador Roya Rahmani, Afghanistan’s first female envoy in Washington, said Monday, adding for that delegation, “There is no compromise on the women’s rights.”But like Ghafari, she urged the U.S. to more-actively support women’s rights in this process, saying it’s as much a national security issue as the deal itself: “Youth, women … these are the United States’ best allies. The people the United States have invested in over the past 19 years are basically their insurance policy for ensuring their long-term interests to make sure Afghanistan will never become a safe haven for terrorism.”Copyright © 2020, ABC Audio. All rights reserved.