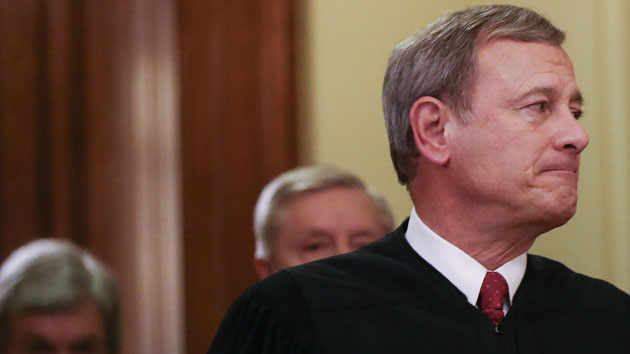 Mario Tama/Getty Images(WASHINGTON) — Chief Justice John Roberts of the U.S. Supreme Court delivered a rare public rebuke of a sitting member of Congress on Wednesday, accusing Senate Democratic Leader Chuck Schumer of making “dangerous” threats against two justices by name.Schumer, speaking at a rally earlier Wednesday outside the court, which was hearing a case on abortion, called out the two justices appointed by President Donald Trump — Neil Gorsuch and Brett Kavanaugh — saying, “you have released the whirlwind, and you will pay the price. You will not know what hit you if you go forward with these awful decisions.”The comments were delivered before a raucous crowd of several hundred abortion rights activists who had assembled at the steps of the high court as the justices heard oral arguments over a Louisiana law requiring abortion providers to have hospital admitting privileges within 30 miles of their clinic.The case marks the first time Gorsuch and Kavanaugh will weigh in on the issue of abortion since being confirmed.”We know what’s at stake. Over the last three years, women’s reproductive rights have come under attack in a way we haven’t seen in modern history,” Schumer shouted as the crowd roared. “We will tell President Trump and Senate Republicans who have stacked the court with right-wing ideologues that you’re going to be gone in November, and you will never be able to do what you’re trying to do now ever, ever again.”Several hours later, after Schumer’s comments ricochetted across social media, Roberts issued a statement through a court spokeswoman.”Justices know that criticism comes with the territory, but threatening statements of this sort from the highest levels of government are not only inappropriate, they are dangerous,” Roberts said in the statement. “All Members of the Court will continue to do their job, without fear or favor, from whatever quarter.”Roberts has said he feels an obligation to defend members of the federal judiciary who typically cannot defend themselves from intense public criticism in order to remain impartial; but he has also deliberately sought to avoid the spotlight and public statements that might politicize the court.In 2018, Roberts issued an extraordinary direct response to Trump’s criticism of federal judges, but did not mention the president by name.Roberts did not respond last month when Trump, for the first time in the White House, directly attacked Justices Sonia Sotomayor and Ruth Bader Ginsburg, accusing them of bias.Schumer spokesman Justin Goodman said the Democratic leader’s comments were “a reference to the political price Senate Republicans will pay for putting these justices on the court, and a warning that the justices will unleash a major grassroots movement on the issue of reproductive rights against the decision.”He accused conservatives of “deliberate misinterpretation” of Schumer’s remarks.”To me this sounds like he’s talking about a physical price, violence,” said Sen. John Barrasso, R-Wyo., in an emotional statement from the Senate floor. “These are members of the Supreme Court — he the minority leader of the United States. … I believe these statements are outrageous. They’re uncalled for. They’re out of bounds. And on their face, they appear to invite violence against members of the Supreme Court.”Copyright © 2020, ABC Audio. All rights reserved.