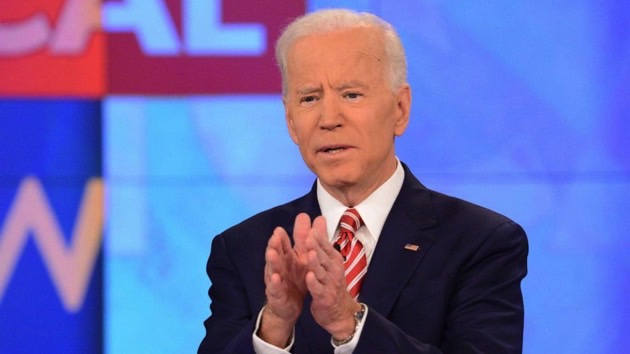 ABC(LOS ANGELES) — While former Vice President Joe Biden scored huge wins on Super Tuesday in the Democratic presidential primary, it is two women in his campaign, — his wife Jill Biden and senior adviser Symone Sanders — who are being called the real heroes of the night.Jill Biden, the former second lady of the U.S. and longtime community college professor, was the first line of defense between her husband and protesters during his primary night rally in Los Angeles Tuesday night.When Jill Biden spotted an anti-dairy protester tried to storm the stage as Joe Biden was thanking supporters, she quickly put herself between her husband and the protester, who was stopped by a security guard.Seconds later, when another “Let Dairy Die” sign-wielding protester actually made it onto the stage, Jill Biden grabbed the protester by the wrists and pushed her away, as Joe Biden and his sister Valerie looked on.Jill Biden was then helped by Sanders, who ran onto the stage, tackled the protester and dragged her away.The dramatic moment was captured on camera, and quickly went viral on social media, with people calling for Jill Biden to be nominated as vice president or secretary of defense.

Comedian Amy Schumer posted the video on her Instagram and narrated the play-by-play, calling Jill Biden a “warrior.”Schumer also posted and narrated a clip of the moment after the drama had ended, when Jill Biden reached out to her sister-in-law Valerie Biden, appearing to make sure she was okay.”Sister-in-law love #jillbidenslays,” Schumer captioned the video.Over on Twitter, commenters hailed the toughness and quick-thinking of both Sanders and Jill Biden.

If any NFL teams are scouting for a right guard, Jill Biden is available.

Jill Biden for Secretary of Defense

Sanders had some fun with her viral moment, tweeting, “I broke a nail.”

I broke a nail. #SuperTuesday

Jill Biden simply tweeted, “What a night,” along with a photo of herself with her husband on the rally stage, no protesters in sight.

Tuesday night was not the first time in this presidential campaign that Jill Biden has protected her husband from protesters.Last month, just before the New Hampshire primary, she got up from her seat at a campaign event to escort away a man who was heckling Joe Biden and filming him on his phone. “I thought I’ve got to do something right now,” Jill Biden said on The View after the incident. “You’ve got to protect those you love, right?”