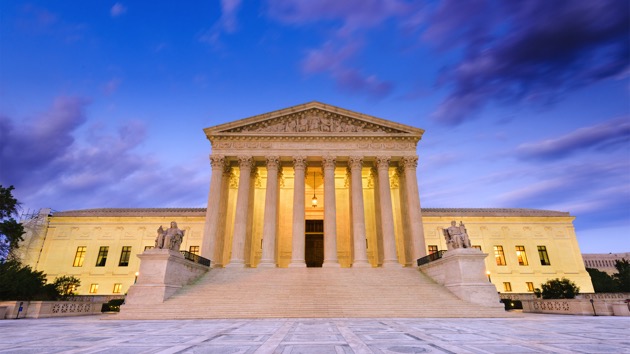 SeanPavonePhoto/iStock(WASHINGTON) — The Supreme Court heard oral arguments for the latest landmark abortion case on Wednesday morning, which could change the landscape of abortion law in America — and abortion access — for years to come, and all eyes were on Chief Justice John Roberts. Before a packed courtroom, the justices engaged in at times explosive debate in June Medical Services v. Russo over a 2014 Louisiana state law requiring doctors who perform abortions to have admitting privileges with a hospital within 30 miles of the clinic, which allows a patient to go to that hospital if they need urgent care. Louisiana’s law is effectively identical to one from Texas ruled unconstitutional by the Supreme Court in 2016 that “led to the closure of half of Texas’ clinics, or thereabouts,” Justice Stephen Breyer wrote in the court’s opinion, without improving health outcomes for patients.But both sides tangled over whether the circumstances are different here. In a sign the court may look to clarify the Texas decision, Roberts and several of the justices who lean more conservatively asked whether the constitutionality of admitting privileges regulations should be highly fact-dependent and decided on a case-by-case basis.

“Are you saying that admitting privileges laws are always unconstitutional, such that we don’t have to look at the facts in state-by-state?” Justice Brett Kavanaugh asked.Roberts asked several times if an across-the-board ban on this type of regulation should apply, asking questions such as, “Do you agree that the benefits inquiry under the law is going to be the same in every case, regardless of which state we’re talking about?” He did not seem to indicate he had made up his mind.

One possible outcome, experts said, was for the justices to return the case to a lower court for another look at the Louisiana law, while also signaling to states seeking similar regulations to tailor them accordingly.”We emphasized to the Justices today that nothing has changed in the last four years that would warrant a different ruling,” Julie Rikelman, the Center for Reproductive Rights attorney who argued the case for the abortion providers, said in a statement after arguments ended. “In fact, the medical consensus has only grown stronger that admitting privileges are medically unnecessary and actually harm women by closing clinics and putting abortion out of reach.” Justice Ruth Bader Ginsburg led the more liberal-leaning justices in an aggressive attack on the Louisiana law, with their questioning primarily focusing on if admitting privileges have a benefit in the first place. Ginsburg pointed out several times — calling it “odd” — that the requirement is for hospitals within 30 miles of a clinic, but that won’t necessarily be close to a patient who experiences complications at home. “Is it not the fact that most hospitals in Louisiana, in order to get admitting privileges, you have to admit a certain number of patients?” Ginsburg asked. “Abortion providers will never … if they’re not also doing obstetrics and gynecology, they will never qualify because their patient’s don’t go to the hospital.” Because abortion statistically has very low complication rates, the need for hospital care is extremely rare.

“Is it right that there is evidence in the record that Hope Clinic has served over 3,000 women annually for 23 years — so that’s around 70,000 women — and has transferred only four patients ever to a hospital?” Justice Elena Kagan asked.

She continued later, “I mean, I don’t know of a medical procedure where [hospital transfer rates are] lower than that of any kind.”

“As a doctor I can tell you that admitting privileges do not make abortion safer — they challenge access,” Dr. Pooja Mehta, an OBGYN in Louisiana and fellow with Physicians for Reproductive Health, said in prepared remarks for a rally outside the court Wednesday. “Abortion in Louisiana is so safe that providers rarely have to send someone to an emergency room, much less admit them to a hospital.” Experts testified during trial in district court that hospitals can decide their own criteria for granting privileges and that they are often highly subjective measures. All doctors are licensed in the state through a separate process to ensure competency and safety.Louisiana is also questioning “third-party standing,” essentially asking if providers and clinics should legally be allowed to challenge abortion laws on behalf of patients. Abortion rights advocates say it may be difficult to find individual patients to challenge abortion laws given the limited time one has to get an abortion and the risks of being targeted by anti-abortion advocates.As the case was heard inside the Supreme Court, rallies took place outside by hundreds of both anti-abortion and abortion rights advocates. These demonstrations included politicians like Rep. Ayanna Pressley, a Democrat from Massachusetts, and Rep. Steve Scalise, a Republican from Louisiana.Demonstrations were also held elsewhere by NARAL Pro-Choice America, a group that supports keeping abortion legal, about swing state senators who voted in Justice Brett Kavanaugh.”The law at issue in June Medical Services v. Russo seeks to ensure that women get the competent and quality care that they deserve,” Jeanne Mancini, president of the anti-abortion group March for Life, said in a statement, going on to claim Louisiana abortion providers have “serious health and safety violations.” “Louisiana abortion providers have a record of non-compliance with basic safety regulations, and now they want a special exemption from generally-accepted medical standards that apply to similar surgical procedures in our State,” Louisiana Attorney General Jeff Landry said in a statement Tuesday. “Women seeking abortions deserve better than that; they should have the same assurance of prompt and proper care in the event of complications.”Although an amicus brief filed on behalf of 207 member of Congress — all but two of whom are Republicans — asked the Supreme Court to use this case to reconsider or overrule Roe v. Wade, the 1973 case that declared abortion a protected right, Roe is not directly on the docket here. However, “without overturning Roe at all,” the Supreme Court could use this case to “make abortion access in this country even more fraught,” Kimberly Mutcherson, co-dean and law professor at Rutgers Law School, told ABC News. The case will be decided by the end of June. Copyright © 2020, ABC Audio. All rights reserved.

New York City buskers look back on a pandemic summer
Trump threatens more lawsuits, but court challenges are hitting dead ends
Netflix pulls the plug on ‘Chappelle’s Show’ at Dave Chappelle’s request
Black-owned brands to support and shop for on Black Friday and beyond
Color changes in fingers, toes may be first sign of Raynaud’s syndrome
ICU nurse issues warning on Facebook as her dad is treated for COVID-19 on her floor