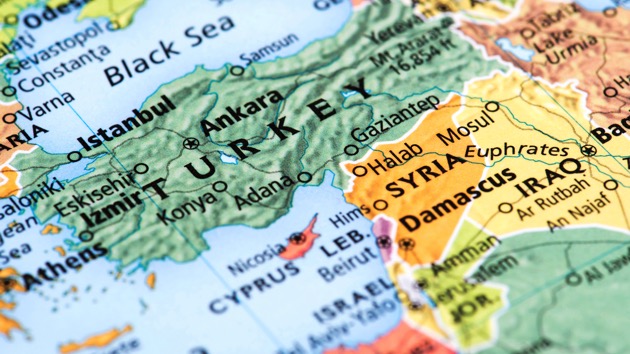 omersukrugoksu/iStock(NEW YORK) — A high-level Trump administration official traveled up to the border with Syria’s last rebel stronghold in a show of support for Turkey and its armed Syrian opposition groups’ fight against the regime of President Bashar al-Assad and to highlight relief efforts for the nearly 1 million people who have fled recent fighting.U.S. Ambassador to the United Nations Kelly Craft met with White Helmet rescue workers and announced a new injection of U.S. aid money for the humanitarian crisis unfolding just across the Turkish border in Idlib province on Tuesday.The new assistance is the first tangible step the U.S. has taken to respond to the offensive, which has displaced 948,000 people, the majority women and children, since December. Seeking to win the nine-year war militarily, Assad’s forces, backed by Russia and Iranian-commanded troops, have violated a ceasefire deal with Turkey and the Syrian rebels it supports, including jihadist groups.”Humanitarian aid is only a response, but the solution is an immediate ceasefire,” Craft told reporters on the border. “We are asking for other countries to step up and contribute.”Along with U.S. special envoy James Jeffrey, Craft announced an additional $108 million of U.S. assistance for food, shelter, winter clothing, medical care and safe drinking water. Those funds will be distributed on the ground through the U.N. and other international and nongovernmental organizations, who work across the border into Syria to provide humanitarian aid to those in need.Craft began her day at the border with Mark Lowcock, the United Nations humanitarian affairs coordinator, where she urged the U.N. Security Council to ensure the border crossing stations at Bab al Hawa and Bab al Salam remain open, referring to them as “vital humanitarian cross-border lifelines into Syria.”But those border crossings are threatened by Russia’s veto at the U.N. Security Council. Earlier this year, Russia, with Chinese support, forced the council to reduce the number of humanitarian border crossings, stopping 40% of medical aid to northeast Syria, according to the State Department. The resolution that was adopted will also expire in July, threatening to close the remaining two border crossings, given Russian opposition.”Russia and China cynically conspired to hamper the international community’s ability to deliver humanitarian aid to vulnerable areas in Syria,” State Department spokesperson Morgan Ortagus said in a statement Tuesday.Lowcock said relief operations to meet the needs of nearly 1 million people who fled the recent fighting in Idlib province have been overwhelmed, even as additional pledges are coming in from the United States and the United Kingdom to step up aid for one of the biggest humanitarian crises of Syria’s civil war.The U.N. is scaling up assistance after agreeing with Turkish authorities to double the number of trucks it sends across the border to 100 each day, Lowcock added.Even as Craft was at the border, fighting continued in other parts of the province. A Syrian government warplane was downed by Turkish forces in Idlib on Tuesday, state news agency SANA reported, adding that regime forces shot down two Turkish drones. Turkey launched a military offensive last month in northwest Syria to push back regime forces looking to retake the rebel stronghold.Beyond the humanitarian aid, the U.S. is still considering ways to support its NATO ally Turkey in that fight. A new U.N. report released Monday found that Assad and pro-government forces are using tactics that amount to war crimes in this Idlib offensive, after he, his forces and even Russia, had committed war crimes in the last few months. According to the U.N. Human Rights Council’s special independent panel for Syria, Russia was responsible for at least two bombings of civilian targets last summer — a crowded marketplace and a shelter for displaced families, including a school and medical center.Assad and his forces have “intended to terrorize civilians, in an effort to depopulate the zone and accelerate its capture,” the report said.It also accused the Syrian fighters backed and armed by Turkey of war crimes, including extrajudicial killings and pillaging, during Turkey’s offensive against Syrian Kurds in the fall after President Donald Trump ordered U.S. troops to pull back.Turkish commanders could face “criminal responsibility” for those acts, the report concluded.Among the opposition groups in Idlib, the al Qaeda-affiliated jihadist group Hayat Tahrir al Sham dominates, and the report warned it has conducted war crimes against the local civilian population as well.CORRECTION: A previous version of this story said that Craft took a few steps across the border into Syria, but she did not. We regret the error.Copyright © 2020, ABC Audio. All rights reserved.