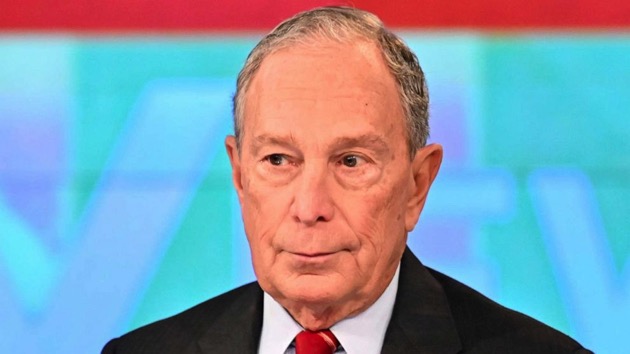 ABC(NEW YORK) — Former New York mayor Mike Bloomberg vowed to spend “whatever it takes” to defeat Donald Trump and has pledged to help former Vice President Joe Biden become president since dropping out of the race.”I’ve always believed that defeating Donald Trump starts with uniting behind the candidate with the best shot to do it,” Bloomberg said in a statement on Wednesday. “After yesterday’s vote, it is clear that candidate is my friend and a great American, Joe Biden.”But while he spent close to $600 million on his own White House bid, and promised to keep campaign offices open through November, he can’t give Biden more than $2,800 each for the primary and for the general election, thanks to campaign finance regulations — which limit how (and how much) he can help Biden.A Bloomberg official on Wednesday said discussions are still ongoing about what shape the now former presidential candidate’s support for Biden will take, and that the Bloomberg team is exploring its options — including independent expenditures through a Super PAC or another outside entity — that would help support his candidacy using the existing Bloomberg campaign operation and national apparatus.“Bloomberg can keep his offices open and his staff employed — all to support Biden — with Bloomberg continuing to pay for it, but the work needs to be done independently of the Biden campaign,” Paul S. Ryan of nonpartisan watchdog group Common Cause told ABC News. “In other words, Bloomberg can run a pro-Biden super PAC, using his campaign office space and campaign staff. Bloomberg’s pro-Biden effort staff couldn’t coordinate it’s spending with the Biden campaign.”“What Bloomberg can not do is simply merge his team and offices with the Biden campaign, with Bloomberg continuing to pay for the operations. That would be an illegally-large in-kind contribution,” he said.Ryan said Bloomberg cannot convert his campaign to a super PAC group supporting Biden, and would need to file new paperwork to do so and spend to help Biden — without any coordination with Biden or the Democratic National Committee.Politically it remains to be seen when Bloomberg will begin his work. A careful reading of his statement doesn’t rule out attacking Vermont Sen. Bernie Sanders in the primary to help Biden win the nomination.“I’ve had the chance to work with Joe on those issues over the years, and Joe has fought for working people his whole life,” Bloomberg said. “Today I am glad to endorse him – and I will work to make him the next President of the United States.”While no decisions have been made, the Bloomberg operation could potentially begin supporting Biden in the primary by undercutting Sanders, who Bloomberg repeatedly argued would lose the election to Trump and imperil down-ballot Democrats.But the difference between sending out pro-Biden leaflets in states with upcoming primaries and flooding airwaves with negative ads about Sanders is a sharp one. Aggressive efforts could also hurt efforts to unite the party in the fall.It might not even be necessary depending on how the rest of the primary plays out, given Biden’s expected strength in some of the upcoming contests.Asked if Bloomberg would run ads against Sanders on MSNBC on Wednesday, campaign manager Kevin Sheekey did not rule it out, only noting that the campaign was still running previously-reserved ads attacking Trump.“Let’s just say we’re running a fully negative campaign and we’ll see how it goes,” he said.Before he suspended his campaign, Bloomberg’s team sketched out an aggressive effort focused on Florida and five other battleground states, mobilizing voters and relentlessly pounding Trump. Bloomberg’s campaign told ABC News that will be paid through the end of March.The former New York City mayor, who has funneled hundreds of millions of dollars into helping elect Democrats in Congress over the years, could also help down-ballot Democrats in 2020.Not only has Bloomberg been one of the biggest donors major party-linked super PACs spending to elect Democrats to Congress, two political groups founded and funded by him have boosted Democrats over the last decade.Just in the 2018 election cycle alone, Independence USA, a super PAC founded and funded by Bloomberg, spent more than $110 million in supporting more than 20 Democratic candidates in House races, including Georgia Rep. Lucy McBath and California Rep. Harley Rouda, who have both endorsed his now-wrapped presidential run. A political arm of Bloomberg’s pro-gun control group Everytown for Gun Safety spent millions to support Democrats in the last mid-terms.And Bloomberg has already been on the move in 2020. Just in December, Bloomberg donated $10 million to pro-House Democratic group House Majority PAC and $5 million to the new Stacey Abrams-linked group, Fair Fight. In November, he gave $800,000 to the Democratic Grassroots Victory Fund, a Democratic National Committee-linked fundraising vehicle, more than $300,000 of which went to the DNC directly.Bloomberg also poured millions of dollars into a tech company called Hawkfish, a digital and tech firm aimed at closing the gap for Democrats with Trump’s sophisticated digital operation that helped him win in 2016. Other Democratic campaigns could retain Hawkfish’s services as it would any other campaign vendor.Copyright © 2020, ABC Audio. All rights reserved.

Oscar winners George Clooney and Regina King among ‘People’ magazine’s 2020 People of the Year
‘Happiest Season’ breaks Hulu records; writer-director Clea DuVall says it was exciting and intimidating
Tyrese Gibson says the feud between him and The Rock has officially ended
‘You need to assume you became infected’ at Thanksgiving: White House task force warning
CDC shortening recommended COVID-19 quarantine period from 14 to 7-10 days
Contract extension to keep LeBron James with the Lakers