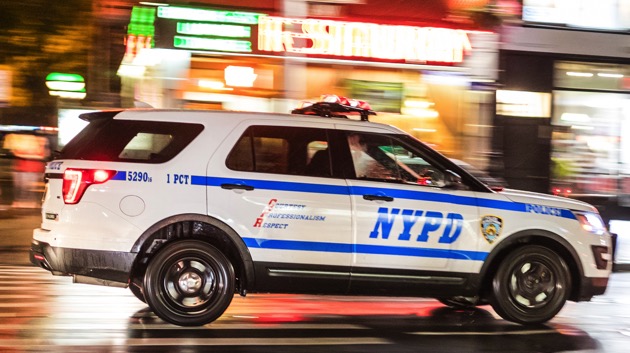 william87/iStock(NEW YORK) — Police are investigating an arrest that was captured by a bystander in a pair of videos in Brooklyn, New York, on Wednesday night that showed a man apparently getting assaulted by several police officers and arrested for allegedly smoking weed in a park.”I never thought it would happen to me,” said the young man in one of the videos, who was stopped by a plainclothes NYPD officer from the 69th Precinct.Prior to the cellphone’s recording, officers were patrolling the 100% Playground area of Glenwood Road and East 100th Street around 7 p.m. when they observed two men in the park smoking a lit marijuana cigarette, according to an NYPD spokeswoman.”As the officers approached the individuals, they fled the location,” the spokeswoman said.At some point, a young woman, who says she was on her way home from work and that she noticed the “undercover cop” and one of the suspected men with his back against a metal gate. She started recording.”What crime did I commit? Tell me! What’s the problem?” the unidentified man asked the plainclothes officer while both of his hands were in the air. “I did not commit a crime.”

I’m walking home from work and this undercover cop was holding this man. The guy asked for the cop to identify himself, he ignore that. He asked what crime he commit, he ignore that too. I pulled out my phone. You can hear the guy screaming “I never thought it would happen to me” pic.twitter.com/YW2dI3g8fk

The officer appears to ignore the man’s questions and radioed for backup. A gaggle of uniformed and non-uniformed police officers rushed over.

Pt 2. This shit was just completely unnecessary. Yes the guy was in the park but he has a right to be in there because it closes at 9pm. This happened in Canarsie, Brooklyn. pic.twitter.com/hHjPq3JY2c

“Help me!” screamed the man as he is seen on the video getting thrown to the ground.The first two-minute video appears to show some half dozen police officers tackle, knee, kick and stomp on the man while he’s on the ground pleading for help.”I never been arrested a day in my life,” the apprehended man is heard saying in between cries. Meanwhile, more bystanders gathered and are heard asking for the officers to stop.”Do you need me to call someone?” asked the woman — who identifies herself as “Velvet” — and who recorded the videos. She said she regrets not asking him for his parent’s contact information sooner, she posted later on Twitter.”All I know is he was not dead when they took him away,” she wrote in a Twitter thread.”Upon apprehension, one individual was arrested and the second individual was issued a summons,” the NYPD spokeswoman said. “This incident is currently under internal review.””I don’t like what I saw obviously — it’s not what we’re trying to do here,” said New York City Mayor Bill de Blasio at a press conference Tuesday. “I don’t want any officer to stand on someone’s leg if they don’t have to. I want more communication between officers and the people they’re confronting.”ABC News’ request for more information about the arrests from NYPD was not immediately responded to but the man seen in the video was arrested, according to sources familiar with the case.Nonetheless, since July 2014 the late Brooklyn District Attorney Ken Thompson announced that individuals would not get prosecuted for some marijuana charges. Under the leadership of Brooklyn District Attorney Eric Gonzalez, the 2018 to not prosecute low-level marijuana possession cases, including those involving smoking in public.”The only individuals currently prosecuted for these offenses are those who pose a threat to public safety (e.g. driving with burning marijuana), create a genuine nuisance (e.g. smoking on public transportation or in a schoolyard where children are exposed to smoke) or are involved in violent criminal activity (i.e. “drivers of crime”),” according to a 2018 announcement about the policy change.The NYPD has discretion to arrest anyone for marijuana possession, but Gonzalez “has called for the issuance of civil summonses as a response to low-level marijuana use and possession, as opposed to criminal summonses that make up the current response to most low-level marijuana offenses.”Criminal court summonses are issued in order to avoid arrest and getting fingerprinted “unless they fail to show identification,” according to the state’s Unified Court System.”Civil summonses are similar to traffic tickets, and compliance is ensured through fines, not warrants and arrests. In addition, civil summonses carry no possible jail time and are adjudicated by the City’s administrative tribunal, the Office of Administrative Trials and Hearings (OATH),” according to the city’s Criminal Justice Reform Act.After the videos were posted, they were liked over 100,000 times, retweeted over 54,000 times and received over 4,200 comments including a thread by city criminal defense attorney Rebecca Kavanagh.

This content needs a strong trigger warning for police violence. This young man was stopped by a plainclothes police officer this evening in Canarsie, Brooklyn, apparently for being in a park shortly after the 9PM closing time. pic.twitter.com/RxYHWKfIho

“Regardless of the reason for the stop (because I am sure NYPD will come up with a reason like a report of a gun) there is no possible justification for this horrific use of violence,” wrote Kavanagh.

The Civilian Complaint Review Board (CCRB) was also alerted on Twitter about the video and has created a thread to explain to the public and the women who posted the video on how to file a complaint.

THREAD: The CCRB has been made aware of a video recording of an incident that took place last night in Canarsie, Brooklyn. After being tagged on Twitter, the Agency notified the video's owner of how to file a CCRB complaint if they believe police misconduct occurred.

Civil rights activist Rev. Kevin McCall is expected to hold a rally outside of the 69th Precinct on Thursday at 4 p.m. “We will not be silent,” said Rev. McCall. Copyright © 2020, ABC Audio. All rights reserved.