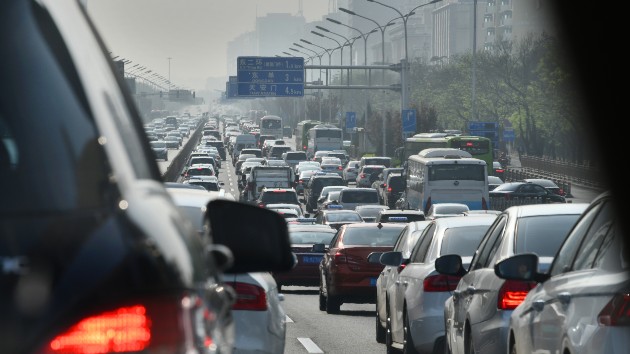 oversnap/iStock(NEW YORK) — The emergence of the coronavirus as a world health epidemic and fears of it spreading have halted air and ground travel in some regions of the world and stalled it elsewhere, significantly reducing the amount of carbon emissions being released into the atmosphere.Pollution monitoring satellites from NASA and the European Space Agency have detected significant decreases of nitrogen dioxide over China since Jan. 1, following the outbreak of the virus — evidence that the noxious gas being emitted by motor vehicles, power plants and industrial facilities has nearly come to a complete stop.And China isn’t the only part of the world where emissions from travel have slowed down. Almost every U.S. air carrier has suspended international flights to affected areas and has issued traveled waivers for passengers who have flights booked in the coming months. In addition, global air traffic decreased by 4.3% in February amid the COVID-19 outbreak, aircraft flight traffic website FlightRadar24 announced on Tuesday.The question is: Is the reduction in emissions enough to mitigate climate change and the environmental dangers that come with it? According to experts, the answer is no.Similar events in the past did not affect overall climate crisisScientists can find similar reductions in emissions in other points of history where economic slowdowns occurred, such as World War II and the Great Recession, Richard Alley, a geosciences professor at Penn State University who specializes in climate change, told ABC News.Events such as those have “made tweaks” in emissions, but they haven’t changed the overall upward trend, Alley said.The last time NASA scientists saw such a drop in nitrogen dioxide over such a wide area for a specific event was during the economic recession in 2008, but that decrease was gradual, said Fei Liu, an air quality researcher at NASA’s Goddard Space Flight Center.In fact, if there were a major change in the world’s economy enough to make a difference in climate change, the world’s population would have much more immediate problems to worry about than a climate crisis in the next 100 years, such as whether people could work and buy food, Alley said.Emissions slowdown may be “counterintuitive” to helping environmentPeople may be mistaken if they feel like a temporary drop in greenhouse gas emissions is good for the environment, Andrea Dutton, a climate scientist at the University of Wisconsin-Madison, told ABC News.When pollution is released into the air, the particulates “actually have a shielding effect” from the sun, Dutton said.”If you take that away, then it has the opposite effect,” and the planet could warm even faster, Dutton said.The economy will eventually rebound and “what really matters” is the cumulative emissions into the atmosphere over time — since the Industrial Revolution.”The real big thing to focus on is cumulative emissions,” she said. “Until we address that and make the sustainable cuts we need, then we are effectively not solving the problem.”Coronavirus outbreak may teach us to be more efficient with travelThe curbing of travel as a result of the coronavirus may offer a valuable lesson the world can use to continue to reduce carbon emissions in the future, Robin Bell, a research professor specializing in glaciology at Columbia University’s Lamont-Doherty Earth Observatory, told ABC News.Since the outbreak, health officials have been warning business leaders to make preparations for employees who may not be able to make it to the office.In addition, multiple conferences in the U.S. have been canceled over COVID-19 fears, such as the annual Google I/O conference and the Association of Southeast Asian Nations summit in Las Vegas. The World Bank and International Monetary Fund are not convening during their annual spring meetings in Washington, D.C., instead choosing to hold them using a “virtual format” via teleconference.There could be a lesson in the upending of routine as it offers “a chance for us to learn what is it that we have to do to … reduce our carbon emissions,” Bell said.”Is this a chance to experiment with all we do, like go to meetings and travel — how we can do all those things without such a carbon load on our planet?” Bell asked, adding that she has already had meetings with people from China who participated remotely. “Is this going to push us to reduce the carbon input of much of our day-to-day activities?”Copyright © 2020, ABC Audio. All rights reserved.