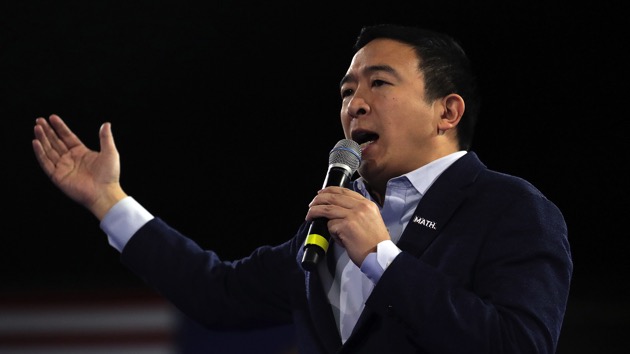 Scott Olson/Getty Images(NEW YORK) — Entrepreneur and former presidential candidate Andrew Yang on The View Thursday morning told the hosts there’s a powerful factor that would play into who he will endorse for president: support for universal basic income.Yang, who made an early entry in the 2020 field and dropped out following the New Hampshire primary, joined The View as a guest co-host on Thursday morning. During his campaign, he championed a “freedom dividend” of $1,000 a month to every American.So far, he hasn’t endorsed anyone in the quickly-narrowing Democratic race, saying “I want the Democratic process play out.”Though, Yang said, if former Vice President Joe Biden or Vermont Sen. Bernie Sanders came out “powerfully for the freedom dividend, that would go a very long way.”After announcing they would suspend their campaign, three other former candidates put their support behind Vice President Joe Biden: Minnesota Sen. Amy Klobuchar, billionaire Mike Bloomberg and former South Bend, Indiana Pete Buttigieg.Today, Massachusetts Sen. Elizabeth Warren, the last woman running for the Democratic nomination for president, suspended her campaign.Yang said her team was “going through a very emotional process right now” and acknowledged most expect her to endorse her friend, Sanders — but also said she may not endorse anyone at all.”I was stunned myself at Super Tuesday’s results,” Yang said. Warren came in third place in her home state, earning 17 delegates compared to Sanders’ 27 and Biden’s 32, thus far — as only 96% of the vote is in after Super Tuesday.Overall, Warren picked up 28 delegates on Tuesday, compared to Sanders’ 328 and Biden’s 380.”I got calls from many of the candidates,” Yang said of when he announced his campaign’s suspension. “Elizabeth’s call to me was so magnanimous and generous… she would’ve made a great president.”Copyright © 2020, ABC Audio. All rights reserved.

Black Friday 2020: Tips on the best deals to look out for
Coronavirus live updates: US reports over 110,000 new cases on Thanksgiving
Trump-Biden transition updates: Trump says he’ll leave WH if Biden inaugurated
George Floyd’s brothers on the fight for justice, remembering him on Thanksgiving
Trump-Biden transition live updates: ‘We’re all in this together,’ Biden says
Anticipating a vaccine, supply chain preps for challenges ahead