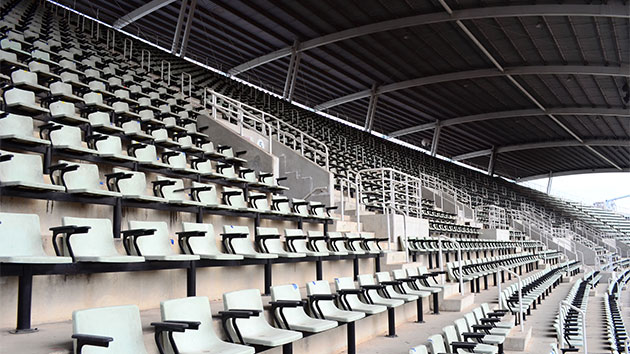 primeimages/iStock(NEW YORK) – Novel coronavirus, officially known as COVID-19, is sweeping around the world with new cases popping up daily in the US and not even sports are immune with league’s across the country and world taking steps to stem the outbreak.

While no player or coach in the US is known to have Coronavirus, the MLB, NBA and NHL have announced or have internal plans to mitigate the spread of the virus with the NHL going the farthest with options to postpone, cancel, or play games in empty arenas, deputy NHL commissioner Bill Daly told ESPN.

No NHL players have attracted the virus, but they did feel the effects last month. Most players’ sticks are made in China and those factories closed, but Daly told ESPN that issue has now been solved.

The NBA hasn’t announced any plans for games, but in a memo obtained by ESPN, the league said players should fist bump instead of high five fans and avoid taking pens to sign balls and jersey’s in the short term.

The league is also planning on limiting the size or even possibly cancelling international scouting, pre-draft combines and individual workouts depending on how big the outbreak becomes.

Should a player contract the virus, he would expect to miss at least two weeks, according to a team medical official who spoke with ESPN.

Both of those leagues are nearing the end of their respective seasons, the MLB is in the opposite camp with Spring Training underway and Opening Day on the 26th. The league has no plans to cancel or postpone any Spring Training or regular season games as of now, according to a memo obtained by ESPN, but the league has set up a task force to deal with any complications that may arise.

The league also recommends that players avoid taking balls and pens from fans and getting a flu shot, while having team’s speak with their local health authorities and consult with an infectious disease specialist to be a channel to those officials.

Some teams have limited access to people who have traveled to coronavirus hotspots in Iran, Italy and South Korea. The league also recommends that team officials avoid travel to those countries along with China and Japan, based on Center for Disease Control travel advisories.

Major League Soccer’s season also just began and the league has created a task force, according to ESPN. In a statement, the league said they are in contact with the CDC and the Public Health Agency of Canada.

King County, Washington, which includes Seattle, has declared a state of emergency after a spike in cases and deaths.

The Seattle Sounders opened their season in front of 40,000 fans on the 1st and also hosted a team from Honduras three days before that game. According to ESPN, the team and their stadium partner released a statement before their first game saying they are “monitoring public health developments” and they have a “real-time communication with regional health authorities.”

The NFL has the longest time till their season begins, but teams are deep into the draft process with pro-day’s and individual workouts coming up before the draft at the end of April. A spokesperson told the NFL Network’s Ian Rapoport they are closely monitoring developments.

Overseas, Italy is taking the biggest precautions. The country is banning fans from attending games for at least the next month, the Italian government announced Wednesday.

It includes the top soccer league in the country, Serie A, which postponed last weekend’s matches and a Six Nations rugby match against England in mid-March. More than 3,000 people have been sickened and over 100 have died from the virus in the country, the most in Europe.

This summer is also the European Soccer Championship. At a recent meeting, top executives only briefly discussed the virus, according to ESPN. No decision has been made about the tournament that begins on June 12th and is held in countries across the continent.

Events in Asia are also feeling the heat.

At the Tokyo Marathon on March 1st, organizers limited participation to elite men and women runners and wheelchair racers. During a typical year around 30,000 people run.

Organizer’s for this year’s summer Olympics in the city say the games are still on despite the virus. The International Olympic Committee said in a statement that they will continue to follow the advice of the World Health Organization.

The Olympics kick off on July 24th.

The World Athletics Indoor Championships in Nanjing, China scheduled for mid-March were postponed until March 2021. Nanjing is a little over 300 miles from the Coronavirus epicenter in Wuhan.