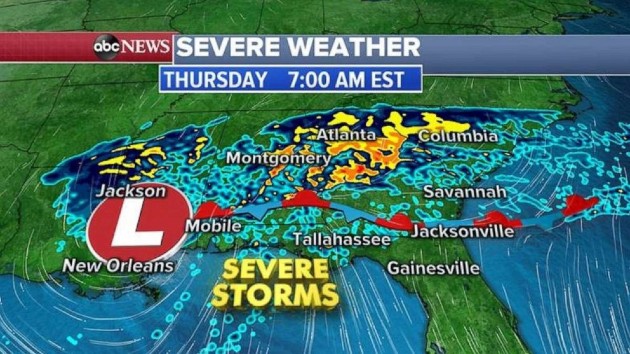 ABC News(NEW YORK) — The National Weather Service determined that the strongest tornado in Tennessee during Monday night’s storm was in Putnam County and was rated as a violent EF-4 tornado with top winds of 175 mph. That was the strongest tornado in central Tennessee since 2009. As of Thursday morning, 25 people were killed in the storms. The NWS does not know yet how long the tornado was on the ground, but the organization expects to find out later Thursday or Friday. Also, a tornado that hit Nashville and Davidson, Wilson and Smith counties was on the ground for a whopping 53.4 miles. This tornado was rated as an EF-3 with top winds at 165 mph. In addition to the two tornadoes mentioned above, there were four other tornadoes confirmed around Tennessee this week.Be on the lookout for more severe weather in the South Thursday with more tornadoes, damaging winds and hail in the forecast for later in the day. The storm system currently stretches from Louisiana to the Carolinas with strong to severe storms already popping up with flooding rains.As the storm moves east Thursday afternoon, the severe weather threat will move into northern Florida and southern Georgia. Tornadoes, damaging straight-line winds and large hail are all possible. Additionally, this weather system is bringing a lot of rain to the South. There are flood watches Thursday morning in Louisiana, Mississippi, Alabama, Florida and Georgia.The biggest threat for flooding Thursday afternoon will be in Georgia and South Carolina, where some areas could see more than 3 inches of rain.