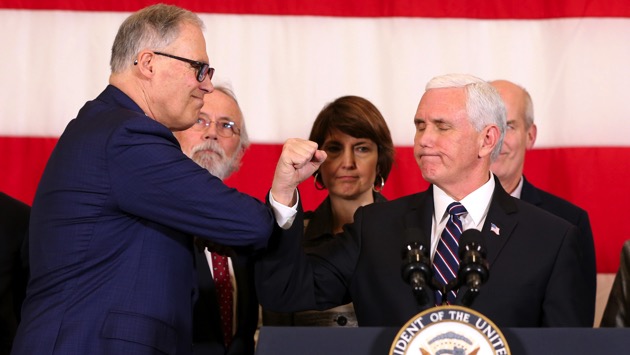 Photo by Karen Ducey/Getty Images(NEW YORK) — Elbows don’t belong on the basketball court, but no one is calling a foul if they’re being used for greetings in place of handshakes amid the COVID-19 health emergency.As the novel coronavirus spreads around the globe — along with expert resources and information on preventative measures — more people are coming up with creative ways to avoid unnecessary touching.And so far, elbow bumps seem to be catching on as the go-to greeting.

Did my first elbow bump in place of a handshake today. Have to say, I quite liked it. pic.twitter.com/BbrmtRsXCj

Everyone from high-powered political leaders and health officials to professional athletes have taken on the tactic to safely say hello without making too much contact.Vice President Mike Pence, who was appointed by the Trump administration to take the lead on the U.S. response to the coronavirus outbreak, set a good example of the growing trend as he arrived in Washington state to meet with Gov. Jay Inslee.Dr. Dena Grayson, a physician and biochemist who studies pandemic threats, told ABC News she’s a huge proponent of the inventive introductions.”There’s so many videos circulating all over the world of people doing the foot taps and elbow bumps and I think it’s fantastic,” she said. “I think elbow bumps are a great alternative to handshakes because you really can’t do that right now.”

While there has been some levity around the cultural shift, Grayson said it’s still raising awareness for folks to practice smart, healthy habits.”It’s OK to make a joke out of it, but it serves as a good public health reminder to everyone to wash your hands avoid touching public objects with your fingers, and don’t touch your face or shake hands,” she explained.

.@GovInslee stopped by our state Emergency Operations Center today and we're all on board with making the elbow bump the new official "handshake" in our state. #COVID19WA #COVID19seattle pic.twitter.com/yNdb7LLoxP

We have announced 2 cases of COVID-19 in San Francisco residents. Here is press release. https://t.co/drsfH75Hv2 Stay calm, wash your hands, and use an elbow bump instead of a handshake. More info at https://t.co/peVp5qJXHX

The IMF is fully committed to support our members during the #coronavirus outbreak. And @WorldBank David Malpass & I are working closely together and… helping stop the spread of germs with an #elbowbump instead of handshake! pic.twitter.com/7xTIpErE4f

Stop the spread of germs by using an elbow bump instead of a handshake! An elbow bump has a 0 percent viral transmission risk. #HSD pic.twitter.com/GvfguMzv0Z

Young Frankenstein taught us all we need to know. #ElbowBump pic.twitter.com/itd0UQtWzr

I recently had the pleasure of meeting with Dr. Daniel Fass. Dr. Fass was instrumental in the development of the #AffordableCareAct and it was great to discuss further ways of improving our healthcare system with him. #elbowbump pic.twitter.com/shV1ArimKl

The U.S. Women’s National Soccer Team exchanged elbows with England instead of hand shakes during the first match of the 2020 She Believes Cup.Rather than high-fives, the San Diego Padres practiced the elbow bump in the dugout during a spring training game in Arizona on Thursday.OK this one may be just a nod to NHL star Jake Muzzin’s fly-by elbow-five celebration, but the joke still landed with some on Twitter, and as Grayson said, it can’t hurt to boast the move.

Imagine having to explain to (some) people this was a joke… 🤦🏻‍♂️ Anyways. It’s Friday, try to have a laugh, enjoy life a little. https://t.co/9en3wrWjUY