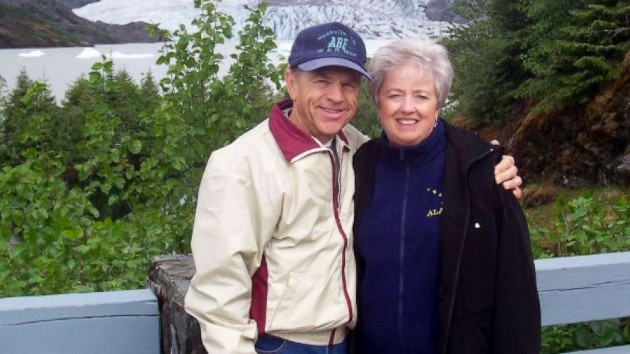 Courtesy Jake Hardy-Moore(NASHVILLE, Tenn.) — As residents in Tennessee began the laborious task of cleaning up and rebuilding their communities — and lives — after at least three tornadoes touched down in parts of the state, one family mourned and remembered a couple that was found dead in their home, side-by-side, after being married for nearly 58 years.”They exemplified what it was to love,” Jake Hardy-Moore told ABC News of his grandparents, James and Donna Eaton, on Thursday.The two were born and raised in East Nashville, and met when they were young children. After they married, the loving couple raised their family in Mount Juliet. The couple had three children, four grandchildren and six great-grandchildren. The large family was the pride of their lives.Early Tuesday morning, three devastating tornadoes ripped through Nashville and other areas of Tennessee, flattening homes, tossing airplanes and downing power lines, according to the governor. Winds reached at least 155 miles per hour — EF-3 tornado level — in Mount Juliet. At least 24 people were killed in total in Putnam, Wilson, Davidson and Benton Counties.The Eatons were among the victims.Before their deaths, Donna and James Eaton lived full and happy lives. Donna Eaton served in her church for 25 years.Pastor Phillip Dunn of First Baptist Church Mt. Juliet told the Nashville Tennesseean: “To know them was to love them.””In 1977 they joined First Baptist Church Mt. Juliet. Jim served as deacon and they both taught many Sunday school classes over the past 43 years. Mr. Eaton was a storyteller and jokester. Many times laughing at his own jokes before he could even finish them. His career was in the transportation industry but his love was his family. He enjoyed playing golf and was looking forward to the spring to get back on the course,” an obituary online read. “Mrs. Eaton was finance director at First Baptist Church Mt. Juliet. When she retired, she still volunteered at the church in any way she could. Jim and Donna Eaton were married for over 57 years. They were a true example of God’s love in their family, their marriage, the community of Mt. Juliet. and beyond. They were humble, kind and lived life fully. Whether they were on their daily walks, cheering on the Cincinnati Reds, Bunko or card night, church fellowship or supporting their children, grandchildren and great-grandchildren through any activity they exemplified the love of God.”The couple was generous and not only volunteered at their church, but also their local hospital. They loved their family and maintained friendships with a group they’d known since high school. That group played cards with each other every Friday night, Hardy-Moore told ABC News Thursday.”They were our family’s inspiration,” he said.Copyright © 2020, ABC Audio. All rights reserved.