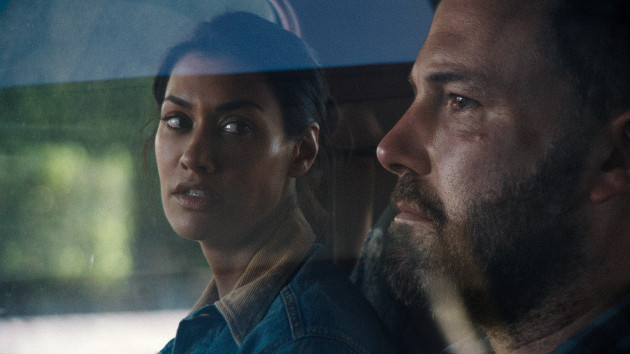 Richard Foreman © 2020 Warner Bros. Entertainment Inc. All Rights Reserved.(NEW YORK) — Ben Affleck has been very open about his personal connection to his character in The Way Back, a man struggling with alcoholism who’s offered a job coaching basketball at his old high school, where he was a hoops hero.

Affleck, who similarly struggles with addiction and was attending rehab during filming, put it all on the table with co-star Janina Gavankar, who plays his character’s estranged wife, Angela.

“Ben and I were very honest with each other about what we were going through in our lives at the time,” Gavankar tells ABC Audio. “And we really tried to put as much of ourselves into this piece as possible.”

“It’s really interesting to have been in this industry for a very long time, but meet somebody at least on this piece who used art for what it’s really made for, which is to, you know, work out your demons — if you’re lucky enough,” she says.

Between their heavy scenes together, Gavankar says she turned to Affleck for filmmaking advice and gained “an artist ally for life.” The actress was co-directing her first short film, Stucco, while simultaneously filming The Way Back and the Apple TV+ show, The Morning Show.

“I pitched a lot of ideas to him and I asked a lot of questions,” she says, adding, “One of the first and best conversations we had was about when he lost his imposter syndrome.”

Gavankar laughs, “I was like, ‘Wow, that sounds like a great day. I wonder when that’s gonna happen to me. Sounds like something I could really look forward to!’”

The Way Back is in theaters now. Stucco will debut at SXSW this year.

Melissa Joan Hart says holiday films have a new importance: “This is the year we all need a happy ending”
‘Jersey Shore’ star Mike “The Situation” Sorrentino and wife Lauren expecting first child
Trump-Biden transition live updates: Giuliani plans presentation in Pennsylvania
GOP has to ‘get back to policies and ideas’: Rep. Denver Riggleman
Here are the top five ways climate change is already hurting your health
This mom created a shopping cart safety seat after her son fell and hit his head