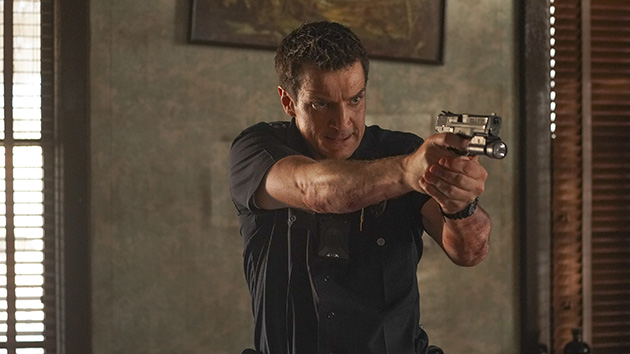 ABC/Richard Cartwright(NEW YORK) — Saturday Night Live’s Pete Davidson makes a guest appearance as the half-brother of Nathan Fillion’s Officer John Nolan on Sunday night’s episode of ABC’s The Rookie, who gets up close and personal with Davidson’s fist.

Nolan, who along with training officer Nyla Harper — played by Mekia Cox — is checking out a classic car he owns in the scene.  Harper isn’t aware of his relationship with Davidson’s character, who’s also named Pete.

When Nolan calls the car’s previous owner “a piece of crap,” Pete reveals it belonged to his dad, meaning Pete Nolan’s half-brother.

Fillion and Davidson first met while filming Suicide Squad 2, and they immediately hit it off.

“I said, you’ve got to come down and do an episode of The Rookie,” Fillion tells ABC Audio, explaining that it’s not something he does as a rule.  “You have to be pleasant for me to say, ‘I need to make this happen.  I need you to be. I need you."”

As for the show itself, Fillion says The Rookie has “a clever dynamic that we can’t repeat a season because the job itself continues to evolve.”

“There is…still so far to go,” he continues.  “Everything that happens is a, ‘Who knows what’s going to happen next?’ As soon as that radio clicks on, it could be anything.”

Fillion plays a man in his 40s who becomes the oldest rookie on the Los Angeles police force.  His attempts at fitting in with the younger cops don’t always succeed, and that’s what he loves about the character.

“I love more when he fails,” says Fillion.  “I think we as human beings learn a great deal more from failure than we do from success.”

The Rookie airs Sunday night at 10 p.m. ET on ABC.