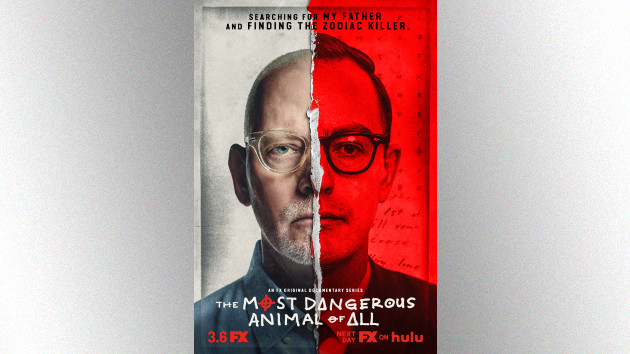 FX(NEW YORK) — Tonight, FX launches its first ever true crime docu-series, The Most Dangerous Animal of All. The four-part series, based on the best-selling book of the same name, follows Gary L. Stewart, a man who comes to believe the birth father he never knew was the infamous Zodiac Killer.

Stewart teamed up with executive producer Ross Dinerstein to bring his rollercoaster of a journey to the small screen.

“I knew within a minute of our conversation that this was the guy that I wanted to tell my story because he got the whole story,” Stewart tells ABC Audio of Dinerstein. “The fantastical hook of the Zodiac Killer is always sensational for everyone. But for me, it was most important that Ross got my story. The human interest side.”

Dinerstein adds, “Yeah and for us, the Zodiac portion was always the B story and Gary’s journey from start to finish is always the A story.”

The first two episodes of the series establishes Stewart’s origin story and the series only gets darker and more unpredictable from there.

“The first two episodes are literally gut-wrenching because I’m not watching a show about somebody else I don’t know,” Stewart says. “That’s me.”

Will Gary find closure on his past while solving one of the biggest cold cases of all time? You’ll have to watch to find out. All four episodes of The Most Dangerous Animal of All will premiere back-to-back on FX starting at 8 p.m. ET. They’ll be available to stream on FX on Hulu Saturday.