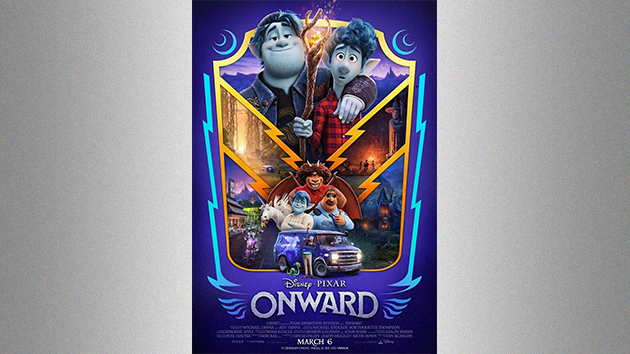 It’s the story of two brothers who get a magical chance to spend one last day with their dad, who died when they were young. The brothers, voiced by Tom Holland and Chris Pratt, live in a world where magic once existed, but it’s been replaced by the convenience of technology.

While technology certainly has its positive qualities at the same time, it’s a double-edged sword, which is something the animated film will explore but in no way is it an “anti-technology movie.”

Writer and director Dan Scanlon told ABC Audio that Onward more so brings to the forefront the fact that because of technology “there are certain things that become so easy we don’t challenge ourselves.”

“Keep challenging ourselves,” he urged. “Bring out the magic in you.”

The message behind the movie especially hits home for Scanlon who shared that the fantasy-drama was heavily inspired by his own life.

“Like the characters in the movie, my dad passed away when my brother and I were young,” he explained. “We don’t remember him. And we had a lot of questions, obviously, about who he was and how we were like him. And that was the seed of this film.”

“And then we set it in a crazy fantasy world,” he added.

Onward, although set in a fantasy world, offers real-world values that executive producer Kori Rae hopes moviegoers will take home with them.

“We really hope audiences kind of walk out thinking about those people in their life who went above and beyond for them and to help turn them into who they became and that they pick up the phone or call or text and reach out to people in their life,” she said