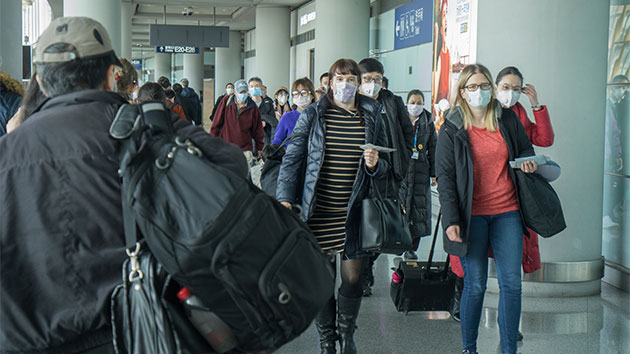 XiFotos/iStock(NEW YORK) —  More than 102,000 people in 88 countries have been infected with novel coronavirus amid an outbreak that has sent countries and states scrambling to respond.At least 3,491 have died, according to Johns Hopkins University, with the majority of those in China, where the virus was first detected in Wuhan in December but has since spread to every continent except Antarctica. The outbreak of the virus, known officially as COVID-19, has been declared global health emergency by the World Health Organization.South Korea, Iran and Italy have the highest national totals of confirmed cases behind China, respectively.The number of Americans diagnosed with the novel coronavirus is now at least 340, according to a case count by Johns Hopkins. At least 17 people have died in the U.S. in Washington state, California and Florida.The states reporting cases are Arizona, California, Colorado, Florida, Georgia, Illinois, Indiana, Kentucky, Maryland, Massachusetts, Minnesota, Nevada, New Hampshire, New Jersey, New York, North Carolina, Oklahoma, Oregon, Pennsylvania, Rhode Island, South Carolina, Tennessee, Texas, Utah, Washington and Wisconsin.Today’s biggest developments:

Here is how the situation is unfolding on Saturday (all times eastern). Please refresh for updates.9:57 a.m. 1st U.S. service member in Europe tests positiveA U.S. Navy sailor stationed at the Naval Support Activity Naples tested positive for novel coronavirus, marking the first positive cause of a U.S. service member in Europe, according to a statement from U.S. European Command Theater.The service member is in isolation at their residence and receiving medical care in accordance with the Centers for Disease Control and Prevention, the statement read. Anyone who had close contact with the patient has been notified and is in self-isolation at their residence.Their condition was not immediate clear.8:50 a.m. 14 Americans under quarantine in Bethlehem hotelThe Palestinian health ministry in Bethlehem confirmed that 14 American citizens are being tested for novel coronavirus and have been quarantined in the Angles hotel in the city of Bethlehem for now.Those American citizens were trying to leave the city yesterday but were sent back to Bethlehem by the Israeli army, according to the Palestinian health ministry. People are not permitted to leave or enter Bethlehem, as per a decision made by Israeli and Palestinian authorities after 17 cases of novel coronavirus were confirmed in the city in the last 48 hours.8:43 a.m. Houston-area church warns of possible exposureA person who tested positive for novel coronavirus attended the 5:30 p.m. Ash Wednesday service on Feb. 26 at the St. Cecilia Catholic Church, according to Harris County Public officials in Texas. The individual received ashes and had communion in the hand, but did not receive communion from the cup, officials said. The person sat in the last pew on the left side of the church.Officials are asking anyone who sat in the last three rows on the left side of the church during that service to contact Harris Couty Public officials at 713-439-6000.In the meantime, St. Cecilia has drained and sanitized the baptismal fonts and sanitized the church’s pews, door handles and restrooms and will provide hand sanitizers at all the church’s entrances. Parishioners are being urged to stay home if they are feeling unwell, according to a statement from the church.7:43 a.m. Pope cancels Sunday prayer gatheringThe Holy See press office said that Sunday prayers would not take place in the square as normal, but from the window of the Library of the Apostolic Palace amid the novel coronavirus spread.The prayer will be streamed live by Vatican News and on screens in St. Peter’s Square “so as to allow the participation of the faithful,” according to the statement, which was translated from Italian.The General Audience, held this upcoming Wednesday, will also be conducted in the same manner.These choices are necessary in order to avoid the risk of diffusion of the COVID-19 due to the gathering during the security controls for access to the square, as also requested by the Italian authorities,” the statement read. “In compliance with the provisions of the Health and Hygiene Directorate of the Vatican City State, the participation of the faithful guests in the Masses in Santa Marta will be suspended until Sunday 15 March. The Holy Father will celebrate the Eucharist privately.”3:46 a.m. Utah gets 1st confirmed caseThe number of coronavirus cases and deaths continued to increase in the U.S. as officials in Utah reported late Friday night that the state had its first confirmed COVID-19 case.Utah officials said they believe the victim was exposed to the virus while on a recent Grand Princess cruise.A different Grand Princess cruise ship is currently just off the San Francisco coast with dozens of passengers quarantined onboard. As of Friday night, 19 passengers on the ship are confirmed to have novel coronavirus and 46 people have been tested, Vice President Mike Pence said at a press conference Friday.Organizations across the U.S. have been grappling with how to handle the spread of the virus.The NBA, according to ESPN, sent a memo to teams telling them to prepare to play in front of empty arenas in the near future.The memo, obtained by ESPN and ABC New York affiliate WABC, said NBA teams were asked to develop a process and identify actions required if they had to play games without fans in attendance and with only essential staff at the arena.Following Friday night’s win over the Milwaukee Bucks, Los Angeles Lakers star LeBron James addressed the league’s memo to teams, warning he might not play in an empty arena.”I ain’t playing. If I ain’t got the fans in the crowd, that’s what I play for. I play for my teammates, I play for the fans,” James told reporters in the locker room following the game. “That’s what it’s all about. If I show up to an arena, and there ain’t no fans there? I ain’t playing. So, they could do what they want to do.”The University of Southern California and Stanford University both moved all classes online in response to the Coronavirus outbreak.Stanford announced Friday that all classes would be moved online for the final two weeks of the quarter and USC said it is going to test remote classes for two days next week.“Our university must be nimble and flexible in the event that we need to make any further changes to the semester,” Charles F. Zukoski, USC Provost and Senior Vice President for Academic Affairs, said in a statement Friday. “We have about 7,000 lecture classes this spring. We need to test our technical capabilities to ensure academic continuity in an online environment should there be a disruption.” Copyright © 2020, ABC Audio. All rights reserved.