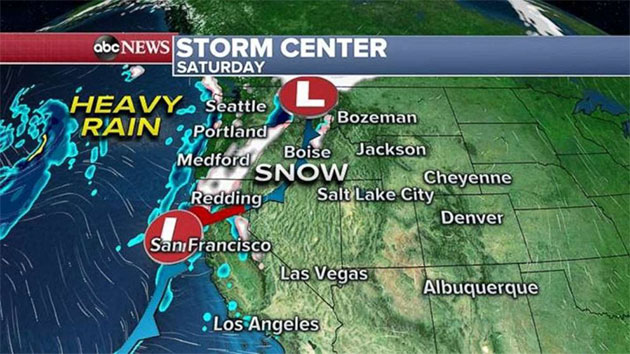 ABC News(NEW YORK) — A frontal system will move into the western United States this weekend and it will bring a couple of areas of mountain snow and rain to the Pacific Northwest.The snow should remain rather light, but 2 to 4 inches will be possible in parts of northern California and parts of Oregon on Saturday. This could cause a few areas of slippery travel in the region.Some enhanced mountain snowfall will be possible Saturday in part of the Sierra Mountains, where locally up to 10 inches will be possible.This system will then move eastward on Sunday into parts of the northern Rockies, and bring areas of snow showers to the intermountain west. By Monday, another impulse will sneak in from the south and bring light rain over parts of the Central Great Plains and Mississippi Valley.At this time, it appears the rainfall should remain relatively light and should not cause any concerns for renewed flash flooding in the South.The next notable weather concern comes to California early next week. Beginning late Monday and lasting through the first few days of the week, a more robust and organized storm will track towards Southern California.This storm could bring the first significant rainfall of the season to parts of California. Locally, 2 to 4 inches of rain will be possible in the region, along with strong wind gusts over 45 mph.This will come after an exceptionally dry January and February in Southwest California. The National Weather Service in Los Angeles said it was one of the driest January and February’s on record for the area. Most parts of the region received less than 5% of their average rainfall totals.Meanwhile, much of the Midwest and parts of the eastern U.S. will see spring-like temperatures over the next few days. Temperatures could be 10 to 25 degrees above average Saturday in parts of the central High Plains. Some of that warm air will then slide eastward.Temperatures are expected to rise into the 60’s in Chicago, Washington D.C. and New York City over the next few days. There is some possibility, that 70 degrees will be possible in parts of the mid-Atlantic on Monday. Copyright © 2020, ABC Audio. All rights reserved.