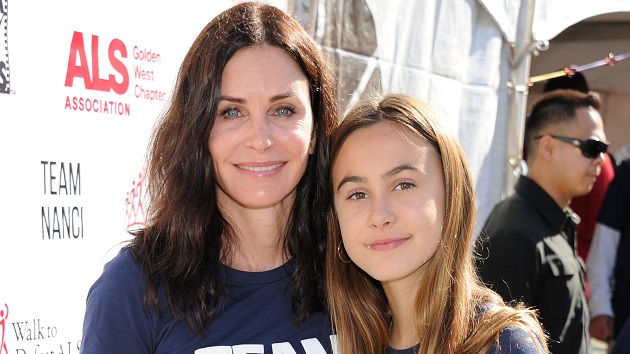 The Friends star teamed up with Coco on Saturday for the daunting task of covering Demi Lovato’s challenging ballad “Anyone.”

The duo’s knockout performance definitively proved that talent doesn’t just run in their family.  It gallops.

With Courteney on the piano, Coco at first stands nervously at the mic as she reads the lyrics off her phone.  The facade lasts for mere seconds as the teen’s soaring vocals quickly elicits astonished looks from spectators — and a proud smile from mom.

The sweetest part of the intimate mother-daughter concert, however, came when Coco stopped singing to sweetly apologize for swearing during one part of the song.

In the caption, Courteney revealed that their gorgeous performance almost didn’t happen.  She had to bribe her daughter first.

“When you have a teenager you barely get to see them. So much negotiating,” joked the actress. “Coco traded me one song if I let her go to a party. I took it.”

This trade might have been one of the best decisions Coco ever made as the video generated nearly four million views within 24 hours.

In addition, celebrities like Charlize Theron, Kate Hudson, Rob Thomas and more have flooded the comments’ section with praise for Coco and questions of when she’ll sing for them in concert.

Bill Murray’s brother Ed, inspiration for ‘Caddyshack’, has died
Scotland becomes first nation to provide free period products for all
Food banks face growing hunger crisis ahead of the holidays during the pandemic
‘Defund the police’ movement six months after killing of George Floyd
Thieves steal thousands of dollars in toys meant for needy kids over Christmas from charity
As Black Lives Matter art is torn down, Minneapolis activists save hundreds of works