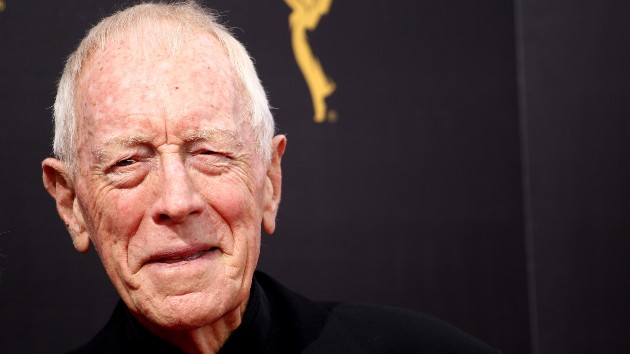 Von Sydow was the star of dozens of films, including 11 from acclaimed director Ingmar Bergman, classic thrillers like The Exorcist and, more recently, Star Wars: The Force Awakens.

The Swedish actor — the only Swede to be nominated for a Best Actor Oscar — passed away Sunday, according to a statement from his widow.

“It’s with a broken heart and with infinite sadness that we have the extreme pain of announcing the departure of Max Von Sydow on March 8, 2020,” she announced in the statement, according to The Hollywood Reporter and other outlets.

Though he often played villains, Von Sydow’s his breakthrough in American films was his role as Jesus in the 1965 epic The Greatest Story Ever Told.

He initially turned down the role of SPECTRE head Blofeld in the first James Bond film, Dr. No, but Von Sydow eventually picked up the Blofeld mantle opposite Sean Connery in 1983’s “unofficial” 007 entry Never Say Never Again.

Von Sydow worked with directors such as Martin Scorsese in Shutter Island and Steven Spielberg in Minority Report.  He’s also remembered for such campy roles as Ming the Merciless in 1980’s Flash Gordon, and a villainous brewmeister in the SCTV spin-off film Strange Brew.

In recent years, he earned an Emmy nomination for playing the Three-Eyed Raven on HBO’s Game of Thrones.

Vanderbilt’s Sarah Fuller becomes the first woman to play in a Power 5 conference football game
Denver Broncos the latest NFL team hampered by coronavirus
Black Friday 2020: Tips on the best deals to look out for
New storm system to travel across the South this weekend
Michael Jordan donates $2M of proceeds from “The Last Dance” to food banks
George Floyd’s brothers on the fight for justice, remembering him on Thanksgiving