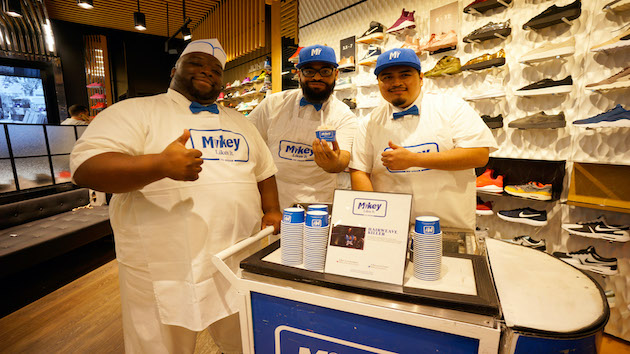 (NEW YORK) — The novel coronavirus forced Mikey Cole to shutdown his ice cream shop, Mikey Like’s It Ice Cream, in March, and like many small business owners he is struggling.

Cole started his business after spending a few months in jail for dealing drugs and was trying to put his life back together when he found an ice cream recipe from an aunt of his who had recently died.

Cole spoke to ABC News’ Cheri Preston, host of ABC News’ ‘Perspective Podcast”, about his experience over the past few months and said it’s been tough to see what’s happened to his community.

“I’m born and raised right here. I come out of my apartment building and I walk two blocks to the store. I [used to] get to say hello to everybody on the street. It’s kind of weird. It’s a great weirdness because it’s love that the community gives you. I’ve always prided [myself] on creating this ice cream for the community. It’s hard because I can’t do what I normally do now,” said Cole on a special edition of the podcast, Pandemic – A Nation Divided.

Since his stores in Harlem and the East Village closed, they have only been delivering to customers in Manhattan, some that Cole has done personally to show his appreciation to customers, but he is closer to getting back to normal with his shops opening back up this weekend.

Cole tried to apply for a Payment Protection Program loan from the government, but he said the process was too burdensome.

He says Harlem has been one of the hardest-hit areas of the city and that everyone should wear a mask when they are out.

“It’s knowing that, consciously, I respect your help. In Harlem some people aren’t doing it. I get upset. I’m like ‘wow I can’t get back to making ice cream,’ but then I remember it’s about everyone. As long as everyone’s safe, there will be a day back when I can make ice cream,” said Cole.

He hopes the ice cream will put smiles on all his customer’s faces.

“I stay creative by creating the flavors that gives you a memorable, nostalgic memory for yourself to then put a smile on your face, no matter what’s going on around you,” said Cole.

Elderly residents at NYC hotel concerned for their health after homeless moved in
Mom loses son to accidental overdose during COVID-19: Here’s what you should know
NHL announces plan to resume season with amended playoffs amid COVID-19 pandemic
How the coronavirus pandemic might change the car business for good
Sweden stayed open during the coronavirus pandemic: Is it a model for the future?
Man throws burning American flag onto police car, spits at cops during arrest