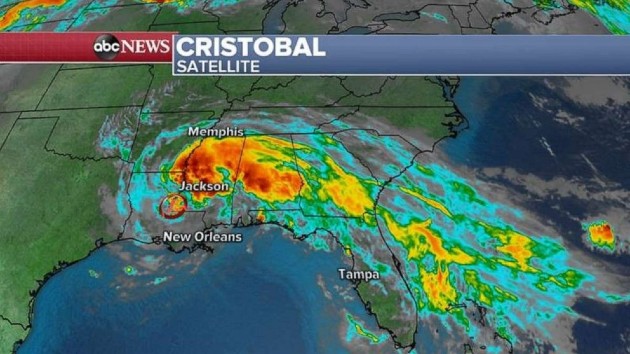 ABC NewsBy MAX GOLEMBO, ABC News(NEW YORK) — Cristobal finally made landfall Sunday evening in southeast Louisiana as a weak Tropical Storm with winds of up to 50 mph. The highest wind gust recorded on the surface was up to 57 mph off the coast of Alabama. The highest storm surge with this storm was 5.3 feet in Louisiana and 4.3 feet in Mississippi. The highest rainfall total was in northern Florida with up to 13 inches of rain between Tallahassee and Jacksonville. Another 7 inches of rain fell in Alabama and Mobile got 5.56 inches of rain which broke a daily rainfall record for the city. There were nine reported tornadoes over the weekend in Florida in the outer bands of Tropical Storm Cristobal and damage was reported in Orlando after a tornado touched down in the city.On Monday morning, Cristobal does not look healthy and is now a dying tropical system that is transitioning to an extra-tropical storm system. The National Hurricane Center is still calling it a Tropical Depression but probably for not much longer. As remnants of Cristobal move north, heavy rain will spread with it into the Mid- and Upper Mississippi River Valley as 10 states are currently under flood alerts Monday morning.Up to 4 inches of rain could fall in the Heartland from the heavy rain and higher amounts are possible locally. In addition to rain, strong winds are expected in the Great Lakes on Tuesday and Wednesday as Cristobal transitions to a mid-latitude storm.

Uncle Ben’s will now be known as Ben’s Original
Beta remnants, flash flooding threat moves East into Louisiana, Mississippi and Alabama
Man run over, killed by his own car as he tried to stop thief from stealing it
Teddi Mellencamp confirms exit from ‘The Real Housewives of Beverly Hills’: “It feels like a breakup”
Reese Witherspoon proves she’s been snapping selfies — and hasn’t aged — since 1996
Kerry Washington shares how she approaches conversations with her kids about race and injustice