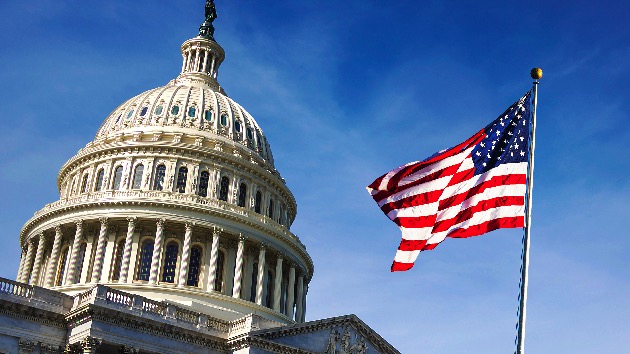 rarrarorro/iStockBy JOHN PARKINSON, ABC News(WASHINGTON) — Congressional Democrats introduced sweeping police misconduct reform bill Monday, seizing the political moment as protests sweep across the country in the wake of George Floyd’s killing, although House Speaker Nancy Pelosi dismissed emerging calls to “defund the police.”“The Justice In Policing Act establishes a bold transformative vision of policing in America,” California Democratic Rep. Karen Bass, the chairwoman of the Congressional Black Caucus, said at a news conference. “Never again should the world be subjected to witnessing what we saw on the streets in Minneapolis, the slow murder of an individual by a uniformed police officer. The world is witnessing the birth of a new movement in our country.”“In a profession where you have the power to kill should be a profession that requires highly trained officers who are accountable to the public,” Bass added.A few minutes before the news conference, Pelosi and Senate Minority Leader Chuck Schumer led a group of Democrats in a moment of silence, taking a knee for 8 minutes, 46 seconds – the time that elapsed when a Minneapolis police officer pressed his knee into George Floyd’s neck.“Today, as we stand in silence, rather than in a spoken pledge, let us reflect on those words ‘justice for all,’ and what we need to do to make those words actually true in our time,” Schumer said.After kneeling, Pelosi struggled to rise to her feet, receiving assistance from an aid and quipping, “It’s better not having on high heels.”“You see how long it was to have that knee on his neck,” she said.Pelosi said Democrats are transforming a “moment of national anguish” into “a moment of national action,” promising the bill is the first step in a series of actions Democrats will take.“Today, with the Justice In Policing Act, the Congress is standing with those fighting for justice and taking action,” Pelosi proclaimed. “We cannot settle for anything less than transformative, structural change, which is why the justice in policing act will remove barriers to prosecuting police misconduct and covering damages.”Asked whether she supports defunding the police, Pelosi said Democrats “want to work with our police departments.”“There are many who take pride in their work and we want to be able to make sure that the focus is on them, she said, acknowledging Congress could “rebalance some of our funding” for police on mental health and policing in schools.“This isn’t about that, and that should not be the story that leaves here,” she added. “Let’s not get into these questions that may be from the small minds of some.”Pelosi ticked through a number of provisions that are in the bill, which is expected to be marked up next week and voted on in the House the week of June 22.“By addressing the quality immunity doctrine, it will end to demilitarize the police by limiting the transfer of military weaponry to state and local police departments,” she explained. “It will combat police brutality by requiring body and dashboard cameras, banning chokeholds, no knock warrants and drug cases and end racial profiling. We’ll finally make lynching for a federal hate crime.”Pelosi and Schumer called on Senate Majority Leader Mitch McConnell to hold a debate in the upper chamber before the end of the month.“Now some Senate Republicans have acknowledged egregious wrongs, but few have expressed the need for floor action,” Schumer, D-N.Y., said. “Too many have remained silent. Maybe they’re hoping the issue goes away. I promise that it will not. Democrats will not let this go away and we will not rest until we achieve real reforms.”While congressional Republicans and President Trump have not expressed a willingness to help make the bill law is the land, House Majority Leader Steny Hoyer implored them to act, exclaiming “we are better than this!”“Black Lives Matter,” Hoyer, D-Md., said. “The protests we’ve seen in recent days are an expression of rage born of despair. Today Democrats in the House and Senate are saying, we see you. We hear you. We are acting.”House Judiciary Chairman Jerry Nadler said his committee will hold a hearing on Wednesday to examine racial profiling, police brutality and lost trust between police departments and the communities they serve.Nadler said that police misconduct is a “systemic problem that requires a comprehensive solution,” and Democrats are responding to the cries from protestors in the streets “calling out for revenge, for change.““For every incident of excessive force that makes headlines, the ugly truth is that there are countless others that we never hear about,” Nadler, D-N.Y. We value and respect the many brave and honorable police officers who put their lives on the line every day to protect us in our communities. But we cannot be blind to the structural racism and injustice that pervades far too many of our law enforcement agencies.”Copyright © 2020, ABC Audio. All rights reserved.

How climate change affects wildfires, like those in the West, and makes them worse
Jennifer Lopez to receive The People’s Icon honor at the 2020 E! People’s Choice Awards
Kevin Hart and wife Eniko welcome baby girl Kaori to the family
NASA says it has finally located the leak on the International Space Station
Bernie Sanders, criticizing ‘bully’ Trump, says debate was ‘not one of the great moments in American history’
Diversifying the flight deck: Less than 1% of US pilots are Black women