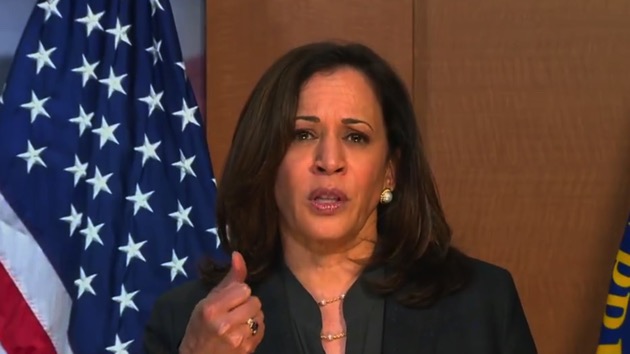 ABC By ALLISON PECORIN, ABC News(NEW YORK) — Sen. Kamala Harris, a former Democratic presidential contender and potential vice presidential pick, spoke out Monday about her efforts to pass a federal anti-lynching bill, which will now be included in a new package of policing reforms being proposed by Senate and House Democrats in the wake of the George Floyd killing.She joined ABC’s The View as Derek Chauvin, the Minneapolis officer charged with second-degree murder in the case makes a court appearance, and speaking as a former prosecutor, said, “it will not be easy to get a conviction” because juries tend to believe police officers.”It is still the case that jurors are inclined to trust — because that’s part of the social contract — to trust police officers and that has been part of the difficulty that so many prosecutors have had when they brought these cases,” Harris told the program’s hosts. “But there’s no denying that this, this officer and those who were his accomplices should pay attention real consequence and accountability for what they’ve done.”“I don’t think there is any question that he did not die of natural causes,” Harris said. “He died while this police officer who had been invested with a badge and a gun by the people used the power he was given by the people to have his knee on a human being’s neck.”

Kamala Harris says "it will not be easy" to convict officers charged in George Floyd's death."It is still the case that jurors are inclined to trust…police officers, and that has been part of the difficulty that so many prosecutors have had when they've brought these cases." pic.twitter.com/zgfcrxApi2

Following the death of Floyd and in the wake of other police incidents across the country, Harris has been leading the Senate Democrats’ charge for policing reform alongside Sen. Cory Booker, D-N.J.Harris, who has been seen marching with protesters in Washington, D.C., had just taken part as House and Senate Democrats unveiled their proposed policing reform legislation that calls for sweeping reforms, including the creation a national police misconduct registry, a ban chokeholds, a restriction on the transfer of military-grade equipment to police departments and inclusion of language that would make lynching a federal crime.While the legislation was spearheaded by the House Congressional Black Caucus, Harris and Booker, two of the three African Americans in the Senate, were working closely with the House on the legislation.Harris appeared at the press conference alongside House Speaker Nancy Pelosi, Congressional Black Caucus Chairwoman Karen Bass, D-Calif., Senate Minority Leader Chuck Schumer, and others.

Sen. @KamalaHarris discusses the sweeping police reform legislation unveiled by Senate Democrats: “This is in the best interest of all Americans. Not just black Americans, not just people of color, of all Americans.” https://t.co/mjKRxEI2Yb pic.twitter.com/YtmCyKpNMz

The new law enforcement legislation could pass the House by the end of the month. But it is not yet clear if any of the proposals outlined in the Democratic bill will muster the necessary GOP support to pass in the Republican-controlled Senate.Some Senate Republicans have made calls for increased reporting of officer related shooting databases and improvements to police training.The Senate Judiciary Committee, lead by Sen. Lindsey Graham, R-S.C., will hold a hearing on police reform next week. The House Judiciary Committee, meanwhile, will hear from Floyd’s brother this week.In the weeks since Floyd’s death, Harris has been outspoken on issues of race and policing. She’s appeared alongside Schumer and Booker calling for a condemnation of the president’s decision to clear Lafayette Park.Harris also made a passionate floor speech arguing against GOP Sen. Rand Paul’s efforts to amend anti-lynching legislation so as to insure only those who inflict serious bodily harm could be charged with the crime last week.”The pain experienced not only by that man, that human being and his family and his children, but the pain of the people of America witnessing what we have witnessed since the founding of this country, which is that black lives have not been taken seriously as being fully human and deserving of dignity,” Harris said.On The View, Harris continued her criticism of Paul’s opposition to the bill, calling it “insulting.”“I felt very strongly about what Rand Paul’s doing, which was one man holding up what would have been a historic bill,” Harris said.Harris has a long history in law enforcement. Before serving in the U.S. Senate, she launched her political career as a prosecutor, first as the San Francisco District Attorney and later as California’s first black attorney general.In 2019, Harris ran for the 2020 Democratic presidential bid but suspended her candidacy just before the end of the year. She’s now considered a frontrunner to serve as former Vice President Joe Biden’s running mate.Copyright © 2020, ABC Audio. All rights reserved.