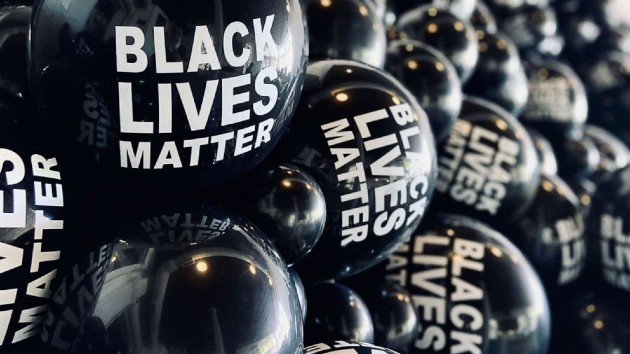 Luft BalloonsBy JACQUELINE LAUREAN YATES, ABC News (CHICAGO) — Following the deaths of Breonna Taylor, Ahmaud Arbery, George Floyd and countless others at the hands of police, many people have been finding ways to amplify the Black Lives Matter movement — including one well-known Chicago-based balloon company.On June 4, Luft Balloons began printing “BLACK LIVES MATTER” on black balloons to support the initiatives of the campaign, which works to fight against violence and systemic racism toward black people.Luft has chosen the lane of art activism. ⁣

“While we know that no amount of balloons can solve the problem of systemic racism, we feel that it is incumbent upon us to use our voice, through our balloon art, to support the Black Lives Matter movement,” said Luft Balloons founder Elaine Frei in a post showcasing the balloons. “We will not remain silent.”With those sentiments top of mind, the brand quickly began producing thousands of the Black Lives Matter balloons and giving them out for free.Each balloon is handed out along with a flyer full of resources for supporters, such as petitions to sign, black-owned businesses to support and educational books on the subject of race.The balloons are free for pickup on Thursdays at 345 Armitage Avenue between 2 and 3 p.m. The company is also accepting donations, all which go to black organizations in the community.”We have a lot of work to do, but I believe that putting these balloons on our doorsteps and carrying them in protest marches will help us connect as brothers and sisters and promote a much-needed dialogue about racial justice,” Frei said. ⁣

On Instagram, Luft Balloons shared a photo of a young boy smiling while holding some Black Lives Matter balloons. “His life matters,” Frei captioned the photo.”We must involve our youth in meaningful, age-appropriate conversation about what is going on,” she continued. “They don’t need angry marches with expletives. They need hope, inspiration and community.”Frei concluded her latest post by asking followers if they would like to help her organize a peaceful demonstration led by kids.Frei’s call for help in organizing a children’s protest came to fruition as she announced that Luft Balloons is partnering with The Kids Non-Violent Protest Against Racism by The Chicago Chapter of Jack and Jill of America, Inc. on June 13.The balloon company will be distributing helium Black Lives Matter balloons for children to hold while marching. Copyright © 2020, ABC Audio. All rights reserved.

Trump to cut refugee admissions to new record low while those accepted left in limbo
No large events to be held at Buckingham Palace this year
Disney+ casts Iman Vellani to play ‘Ms. Marvel,’ the first Muslim superhero
Steelers-Titans game pushed back to later in season due to more COVID-19 cases
Behind in Wisconsin, Trump plans to visit battleground amid COVID-19 surge
Critics call for Facebook to protect democracy with three urgent steps