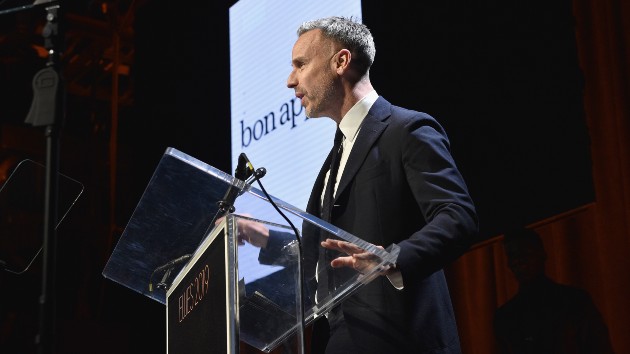 Bryan Bedder/Getty Images for ASMEBy KELLY MCCARTHY, ABC News(NEW YORK) — Adam Rapoport announced Monday night that he is stepping down as editor-in-chief of Bon Appétit after widespread backlash over a brownface photo and multiple calls for his resignation from his current and former staff.”I am stepping down as editor in chief of Bon Appétit to reflect on the work that I need to do as a human being and to allow Bon Appétit to get to a better place,” he wrote. “From an extremely ill-conceived Halloween costume 16 years ago to my blind spots as an editor, I’ve not championed an inclusive vision. And ultimately, it’s been at the expense of Bon Appétit and its staff, as well as our readers. They all deserve better. The staff has been working hard to evolve the brand in a positive, more diverse direction. I will do all I can to support that work, but I am not the one to lead that work. I am deeply sorry for my failings and to the position in which I put the editors of BA.”The backlash began Monday afternoon when a photo from his wife Simone Shubuck’s Instagram resurfaced on Twitter from Brooklyn-based wine professional and journalist Tammie Teclemariam. The picture showed Rapoport dressed in a do-rag, a baseball cap, a Yankees jersey and a chain, with the caption “#TBT me and my papi @rapo4 #boricua”His wife’s post, which was removed from Instagram by noon, included the hashtag “Boricua,” an identifier used among Puerto Ricans that commenters took issue with.Many of the magazine’s current and former test kitchen staff, video staff, editors and contributors called out the photo and Rapoport’s judgment, which led to a wider dialogue about alleged pay disparity and a potentially wider problem within the culture at Condé Nast.BA Director of Research Joseph Hernandez said Rapoport’s “choice to embrace brownface” in the years-old photo, “feels like an erasure of the hard work done by those on staff who are doing the behind-the-scenes, silent labor of educating and advocating for progressive change.”Bon Appétit contributing writer and Indian-ish cookbook author Priya Krishna took to Twitter after the picture emerged and said, “I can’t stay silent on this.”“This is f—-d up, plain and simple. It erases the work the BIPOC on staff have long been doing, behind the scenes. I plan to do everything in my power to hold the EIC, and systems that hold up actions like this, accountable,” Krishna wrote.Assistant Food Editor Sohla El-Waylly posted a statement on her Instagram story.”I am angry and disgusted by the photo of @rapoport in brown face. I have asked for his resignation. This is just a symptom of the systemic racism that runs rampant within the Conde Nast as a whole,” she asserted. “I’ve been at Bon Appétit for 10 months. I am 35 years old and have over 15 years of professional experience. I was hired as an assistant editor at $50k to assist mostly white editors with significantly less experience than me.”She continued, “I’ve been pushed in front of video as a display of diversity. In reality, currently only white editors are paid for their video appearances. None of the people of color have been compensated. I demand not only the resignation of @rapoport but also to see BIPOC given fair titles, salaries, and compensation for video appearances.”A representative for the magazine shared the following statement with ABC News on behalf of the parent company Condé Nast.”As a global media company, Condé Nast is dedicated to creating a diverse, inclusive and equitable workplace. We have a zero-tolerance policy toward discrimination and harassment in any forms. Consistent with that, we go to great lengths to ensure that employees are paid fairly, in accordance with their roles and experience, across the entire company,” the company said. “We take the well-being of our employees seriously and prioritize a people-first approach to our culture.”There was no additional comment on Rapoport or the response from his former colleagues.Food Editor at Large Carla Lalli Music, host of the magazine’s popular YouTube series “Back to Back Chef,” responded to the newest test kitchen member’s IG story with a message of support.”It’s insane that @sohlae is not compensated for videos and I can’t contribute as a host until that changes,” Music said.More staff from the popular food and culture brand weighed in on Twitter and Instagram to voice their condemnation of the incident surrounding Rapoport.Associate editor Christina Chaey replied to Hernandez on Twitter writing that she was “disgusted and humiliated” by Rapoport’s actions.Editorial assistant Jesse Sparks replied to Hernandez’s thread, “I’m furious and exhausted. My whole point for being at this brand has been to uplift and celebrate the work of BIPOC and Queer folx. I’ve put up with a lot of [expletive] because it was more important to me that I could help other people get the recognition they deserved.”Matt Hunziker, who works on the video team in the test kitchen on shows like “It’s Alive” and “Gourmet Makes,” also chimed in on Twitter to further call out the “whiteness” within the food publication.”Many BIPOC & Queer employees and contributors have worked with patience and compassion that has not been given to them in return. The ‘learning and growing’ apologies don’t apply here,” he wrote. “Leadership has been routinely told what needs to happen. It’s a matter of priority/lack thereof.”“Blackface and Brownface are disgusting and cannot be tolerated. Ever,” contributing food editor Rick Andrew Martinez said on his IG story. “We (BA Staff) have been meeting internally to discuss the systemic racism that exists within the brand and within the company and are making a list of changes and demands to make our content more inclusive and our work environment safer and more equitable for BIPOC.”Rapoport, who took over the role of editor-in-chief in November 2010 from Barbara Fairchild, was previously the style editor at GQ. Copyright © 2020, ABC Audio. All rights reserved.