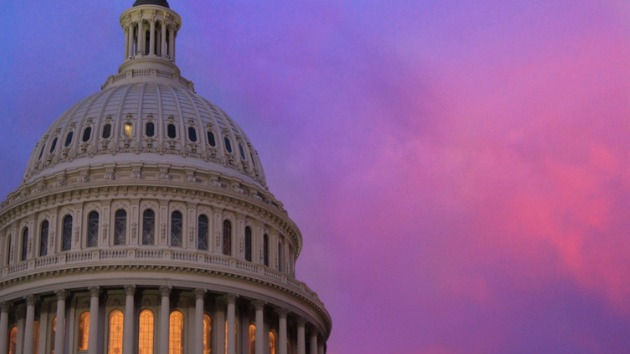 Liam Davidson/iStockBy BENJAMIN SIEGEL, ABC NEWS(WASHINGTON) — House Democrats, prompted by demonstrations against racism and police brutality across the country, are renewing a push to expel Confederate statues from the halls of Congress.As cities and states have started taking down their own Confederate statues after the death of George Floyd in police custody, Rep. Barbara Lee, D-Calif., a senior member of the Congressional Black Caucus, plans to reintroduce legislation on Thursday to do the same on Capitol Hill, removing the roughly 10 statues associated with the Confederacy from the National Statuary Hall Collection.”Americans in all 50 states and millions of people around the world are marching to protest racism and police violence directed at people of color, and yet across the country, Confederate statues and monuments still pay tribute to white supremacy and slavery in public spaces,” Lee said in a statement to ABC News. “It is time to tell the truth about what these statues are: hateful symbols that have no place in our society and certainly should not be enshrined in the U.S. Capitol.”States contribute two statues to the Capitol, which are on display around the complex. Statues of Jefferson Davis and Alexander Stephens, the president and vice president of the Confederate States of America, stand in Statuary Hall, just steps away from the Capitol Rotunda and House chamber. A statue of Gen. Robert E. Lee, donated by Virginia, stands on the first floor of the building, in the Capitol Crypt.Each state commissions their own statues before sending them to Congress, where a joint House-Senate committee determines where to place them. Under current law, states can either request to replace older statues or vote on a change in their legislatures. Lee’s proposal would remove all Confederate statues from the Capitol within 120 days of being signed into law. States would have the opportunity to reclaim the statues or turn them over to the Smithsonian.”It’s something whose time has obviously has come in the minds of the majority of people in this country, especially in light of what’s happening in Minneapolis, Louisville and a bunch of other places,” Rep. Bennie Thompson, D-Miss., a member of the. caucus and chairman of the House Homeland Security Committee, told ABC News in an interview.Thompson, who is working with Lee on the issue, suggested that his home state replace statues of Davis and Zachariah George, a Confederate colonel, with monuments of civil rights leaders Fannie Lou Hamer and Medgar Evers.”Are we going to continue to live in the past and glorify individuals who history was about nullification and racism?” he said. “Or are we going to take a step and listen to the drumbeat of the people who are out here now, saying we want America to represent all people?”Democrats pushed to remove Confederate statues and images from the Capitol in 2015 and 2017, prompted by the mass shooting in a black church in Charleston, South Carolina, and a white supremacist rally in Charlottesville, Virginia, that left one woman dead. But those campaigns largely fizzled out in the GOP-led House and Senate, though Republican House leaders did replace a display of state flags with pictures of commemorative quarters, after Thompson and other lawmakers objected to the display of Southern flags that included Confederate imagery.A spokesman for Senate Majority Leader Mitch McConnell declined to comment on Tuesday. In 2015, the Kentucky Republican called for the removal of a statue of Davis, the Confederate leader, from the Kentucky statehouse, suggesting that a museum would be a “better place” for it.President Donald Trump previously opposed calls in 2017 to take down Confederate statues and monuments and called the effort “foolish.”While it’s not clear how quickly the chamber might take action on the statues, House Majority Steny Hoyer signaled Tuesday that he supported their removal — reaffirming the position of Democratic leaders since the last attempt to do so.”The effort to remove symbols of oppression, slavery and segregation and hate and bigotry, I think are appropriate,” Hoyer, D-Md., told ABC News during a conference call with reporters.Floyd’s death in police custody and the resulting protests in America and around the world have reenergized efforts to tear down statues and other figures representing the Confederacy, slavery and racism.In Virginia, Gov. Ralph Northam, a Democrat, responded to protests with plans to take down a prominent statue of Lee in Richmond, the state capitol. A judge has issued an injunction, preventing the move for now.Jacksonville, Florida, has dismantled a Confederate monument in the city center. The city of Louisville, Kentucky, has also dismantled a statue of John Breckenridge Castleman, a Confederate soldier-turned U.S. general and prominent local businessman.Army Secretary Ryan McCarthy earlier this week said he would be willing to begin bipartisan discussions over re-naming installations named after Confederate leaders, such at Fort Bragg in North Carolina. Following the Marine Corps decision in February, Navy leadership is also readying an order to prohibit the display of the Confederate flag in public spaces and on any aircraft, ships or submarines.In Bristol, England, protesters took down a statue of a 17th-century slave trader, dumping it in the city harbor. In Antwerp, Belgium, the city took down a statue of King Leopold II, known for his brutal rule of Belgium’s African colonies in the late 19th century, that had been defaced by protesters.Thompson said he is optimistic about the latest effort and the message it could send to Americans.”Moving those symbols to the Smithsonian, and not allow them places of honor in the Capitol, would be a seminal moment for this country,” he said. “If we don’t take this moment in time, and heal our wounds, then I don’t think it will ever happen.”ABC News’ John Parkinson, Luis Martinez and Elizabeth McLaughlin contributed to this report.Copyright © 2020, ABC Audio. All rights reserved.