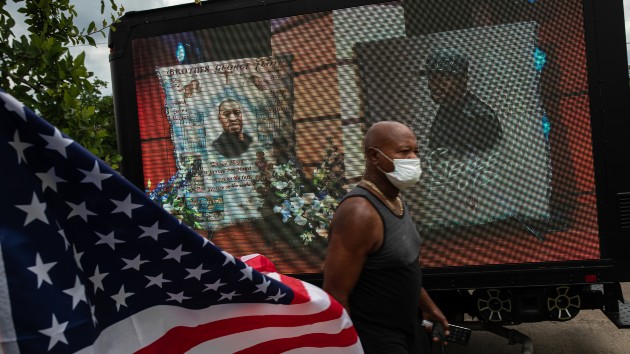 Tamir Kalifa for The Washington Post via Getty ImagesBy MORGAN WINSOR, ABC News(NEW YORK) — The death of George Floyd, an unarmed Black man who died in Minneapolis on May 25 shortly after a white police officer was filmed kneeling on his neck as three other officers stood by, has sparked widespread outrage, anti-racist protests and calls for police reform across the United States and around the world.The Minneapolis Police Department fired all four officers after video of the incident surfaced. The one who prosecutors say pinned Floyd down for nearly nine minutes, Derek Chauvin, has since been charged with second-degree murder and second-degree manslaughter. The three other officers, Thomas Lane, J.A. Kueng and Tou Thao, each have been charged with second-degree aiding and abetting felony murder as well as second-degree aiding and abetting manslaughter, according to court documents.

This story is being updated throughout the day Tuesday. Please check back for updates. All times Eastern:

4:56 a.m.: Black activist who trained police on implicit bias seriously injured in protestsA Black activist who trained San Jose police officers on implicit bias was seriously injured during protests in the California city, the mayor’s office said.Derrick Sanderlin “suffered potentially permanent injuries caused by a rubber bullet at a recent demonstration,” according to a statement Monday from San Jose Mayor Sam Liccardo.Liccardo has called for a ban on the police’s use of rubber bullets in crowds, expanding the authority of San Jose’s civilian independent police auditor as well as a full review of the city’s use of force policies, among other measures. He has also called for greater accountability for police misconduct “so bad cops can be fired faster,” according to the statement.However, Liccardo said that defunding police budgets “will hurt the very people who have suffered the most from systemic racism in this nation.””Rich, white communities and businesses in suburban malls will just accelerate the hiring of private security guards,” the mayor said in the statement Monday.

3:44 a.m.: Public viewing for George Floyd draws more than 6,300 visitorsThousands of mourners lined up in the blazing heat to view the casket of George Floyd in his hometown of Houston on Monday.More than 6,300 people attended the six-hour public viewing at The Fountain of Praise church in southwest Houston. The average wait was about 30 minutes, and four people had to be transported to a local hospital for heat exhaustion, according to Dallas Jones, a deacon at the church.Visitors were required to wear masks and gloves to comply with coronavirus-related guidelines.Texas Gov. Greg Abbott was among the attendees at the public viewing.A private funeral will be held at the church Tuesday, followed by a burial at the Houston Memorial Gardens cemetery in the suburb of Pearland, where Floyd will be laid to rest next to his mother, according to the family’s representatives. Copyright © 2020, ABC Audio. All rights reserved.