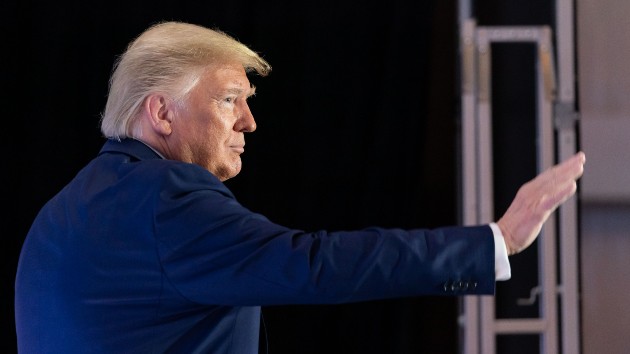 Official White House Photo by Tia DufourBy WILL STEAKIN, ABC News(WASHINGTON) — President Donald Trump’s campaign is planning to resume Make America Great Again rallies in the next two weeks, with advisers banking on the massive protests in recent weeks dampening criticism over holding large in-person events amid the coronavirus pandemic, multiple sources told ABC News.”Americans are ready to get back to action and so is President Trump. The Great American Comeback is real and the rallies will be tremendous. You’ll again see the kind of crowds and enthusiasm that Sleepy Joe Biden can only dream of,” Trump campaign manager Brad Parscale said in a statement to ABC News.The president hasn’t held a rally since March 2 in Charlotte, North Carolina, and while the team expects to face criticism for holding large in-person gatherings, senior aides said the massive protests across the country against racial injustice have provided enough cover for Trump to hit the campaign trail again.Trump campaign officials will present the president with rally options later this week, a campaign official said.The campaign is considering a number of states in which to hold its first rally and will factor in the number of coronavirus cases, as well as take safety measures, multiple sources told ABC News. By Monday evening, there were more than 1.9 million confirmed cases of the coronavirus in all 50 states, the District of Columbia and Puerto Rico.Politico was the first to report the rallies would resume.The news comes as Trump continues to trail former Vice President Joe Biden by double digits.Trump’s campaign resumed in-person canvassing this week, as previously reported by ABC News. And following the announcement of May’s surprising jobless numbers, the campaign launched a $10 million ad buy. The ad, boosting the numbers as proof that the “great American comeback has begun,” are going to run nationally and in swing states on TV and online, according to the campaign. Copyright © 2020, ABC Audio. All rights reserved.