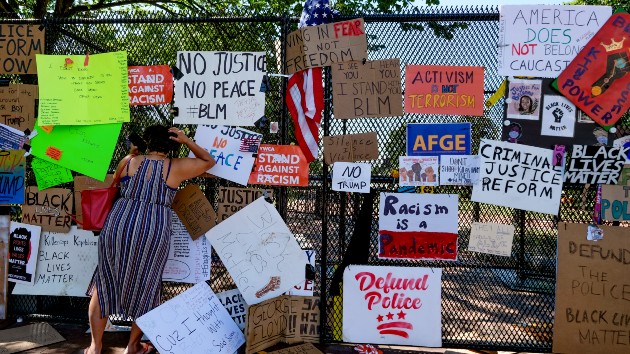 Bonnie Jo Mount/The Washington Post via Getty ImagesBy JORDYN PHELPS and BEN GITTLESON, ABC News(WASHINGTON) — One week after federal law enforcement forcibly pushed back peaceful protesters so President Donald Trump could hold a photo op at a church near the White House, a fence erected to put greater distance between the president and Americans demonstrating in support of racial justice was transformed into a makeshift memorial for black people killed by police officers.Banners, messages of protest, and street art cover the fence, largely obstructing the view of the White House beyond.Inside the heavily-fortified White House, now surrounded by more than a mile of extra fencing, is an increasingly isolated president.His heavy-handed response to the national outcry over the death of George Floyd and his threat to send active-duty military to quell unrest on American streets has been met with backlash from top military figures and members of the Republican establishment.On Monday, he prepared to meet with law enforcement officers at the White House for a roundtable discussion, hardening his image as “law and order” president, as he has resisted making a gesture to demonstrate that he is also listening to the cries of the protesters.As polls showed Americans by and large disapproved of his handling of the protests and race relations more broadly, the president announced Sunday that he was withdrawing the National Guard from the nation’s capital, claiming that they were no longer needed “now that everything is under perfect control” and that “far fewer protesters showed up last night than anticipated!” on the day that D.C. streets were filled with tens of thousands of protesters.At the same time, another poll finding showed 52% favored deploying the military to deal with violent protests.Trump also mocked the first Republican senator to take part in the protests, Mitt Romney, an erstwhile critic of the president whom Trump has lambasted ever since the Utah senator voted to impeach him earlier this year.Romney on Sunday marched to the White House with hundreds of evangelical Christians, telling The Washington Post he came out to help “end violence and brutality, and to make sure people understand that black lives matter.”A day later, Trump sarcastically tweeted, “Tremendous sincerity, what a guy. Hard to believe, with this kind of political talent, his numbers would ‘tank’ so badly in Utah!”Romney’s approval rating among Utahns has actually recently risen, and he is more popular than Trump there, according to the Salt Lake Tribune.Colin Powell, the first African-American secretary of state, and who served under three Republican presidents, became the latest major establishment figure and former military leader to blast the president on Sunday.”We have a Constitution. And we have to follow that Constitution. And the president has drifted away from it,” said Powell, who also previously served as the chairman of the Joint Chiefs of Staff.Trump predictably fired back on Twitter to label Powell a “real stiff” and “highly overrated.”The president’s most extensive remarks on the death of George Floyd came last Saturday following the launch of the SpaceX Falcon 9 shuttle launch. In the days since, the usually chatty president has largely avoided answering questions from the media and has resisted calls for him to deliver a national address.He has made no effort to empathize with the protesters and has instead sought to emphasize the instances of violence and destruction with angry tweets blasting “arsonists, looters, criminals, and anarchists.”Dr. Ben Carson, the president’s secretary of Housing and Urban Development and the highest-ranking African American in his administration, suggested on Sunday that there’s still time still for the president to strike a more empathetic tone.“I believe you’re going to be hearing from the president this week on this topic in some detail,” he said.”And I would ask you maybe to reserve judgment until after that time,” Carson said in an interview with CNN’s State of the Union Sunday when asked about the president’s retweet of a post attacking Floyd’s character. Copyright © 2020, ABC Audio. All rights reserved.