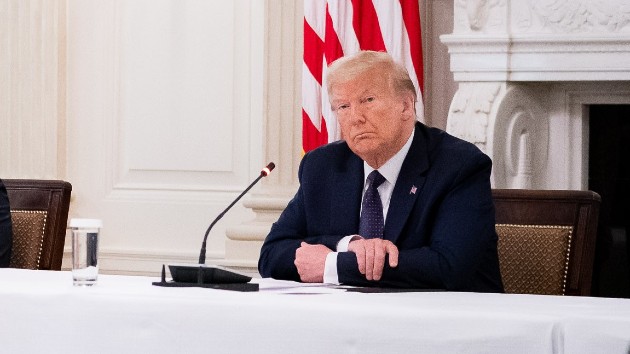 Official White House Photo by Tia DufourBy BEN GITTLESON, ABC News(WASHINGTON) — President Donald Trump on Monday sent a clear message during a White House roundtable with members of law enforcement: The police are doing a “fantastic” job.”There won’t be defunding, there won’t be dismantling of our police and there is not going to be any disbanding of our police,” he said at the afternoon event.”We want to make sure we don’t have any bad actors in there, and sometimes, you’ll see some horrible things like we witnessed recently, but 99 — I say 99.9, but let’s go with 99% of them are great, great people, and they’ve done jobs that are record setting — record setting,” Trump said.The president repeated that the country’s current crime statistics are “among the best numbers we’ve ever had in terms of recorded history.””There’s a reason for less crime, it’s because we have great law enforcement. I’m very proud of them,” he added.Trump made the comments surrounded by top administration officials and half a dozen external participants that included attorneys general from Florida and Kentucky, the national president of the Fraternal Order of Police, the president of the International Association of Chiefs of Police, and representatives of police departments in Illinois and Colorado.Attorney General William Barr said federal law enforcement understands distrust of the criminal justice system and acknowledged that for most of U.S. history, the law was discriminatory.”Law enforcement fully understands and has understood for some time, the distrust that exists in the African American community toward the criminal justice system,” Barr said, adding that he is “optimistic” for future reforms.After the president’s senior adviser and son-in-law Jared Kushner spoke, Trump called him “my star.””Hopefully at this time, where there’s a lot of people in the country who are feeling different pain and feeling different concerns, law enforcement can be a leader and coming together and helping us work towards bringing solutions that could bring this country forward,” said Kushner.The roundtable comes on the heels of Minneapolis City Council announcing Sunday that it would disband the city’s police force in the wake of George Floyd’s death and long-standing issues with police conduct.”They want to end the police department — quote end the police department in Minneapolis — end. What does that mean? End it,” Trump said, noting he saw reports in the papers. “They abandoned their police precinct, something I’ve never seen before. You had a mayor that asked them to abandon, and now they’ve abandoned the mayor, it looks like.”Trump called it the “opposite of far thinking” but said once he brought in the National Guard “it was like magic.”He said the roundtable would continue to discuss how policing can be done “in a lot more gentle fashion.””But we can’t give up the finest, law enforcement anywhere in the world is nothing like it,” Trump said. “So we’re going to be discussing some ideas and some concepts and some things, but we won’t be defunding our police.Trump added, “I guess you might have some cities will want to try but it’s going to be very, very sad situation.”As Congress begins to chart a path forward on police reform, Majority Leader Mitch McConnell Monday afternoon on the Senate floor also swatted down the idea of any proposal that would defund police in exchange for additional social work and mental health programs, calling the matter “outlandish.””I’m all for social work, and mental health,” McConnell said. “But call me old fashion, I think you may actually want a police officer to stop a criminal and arrest him before we try to work through his feelings.”House Speaker Nancy Pelosi has dismissed emerging calls to defund the police but unveiled with House Democrats earlier Monday a sweeping policing reform bill to “work with our police departments.””There are many who take pride in their work and we want to be able to make sure that the focus is on them,” she said, acknowledging Congress could “rebalance some of our funding” for police on mental health and policing in schools.Former Vice President Joe Biden’s campaign also came out against the growing push to join the movement, saying instead he supports the “urgent need for reform.””As his criminal justice proposal made clear months ago, Vice President Biden does not believe that police should be defunded. He hears and shares the deep grief and frustration of those calling out for change, and is driven to ensure that justice is done and that we put a stop to this terrible pain,” Biden campaign spokesman Andrew Bates wrote in a statement released Monday.White House press secretary Kayleigh McEnany, in a briefing moments before Trump opened up the roundtable to press, offered a preview of Trump’s remarks, saying he was “appalled” by calls and pointed to Democrats.”This is rolling back protective layers in our homes and places of business. He’s appalled by it. It’s remarkable from the Democratic party,” McEnany said.