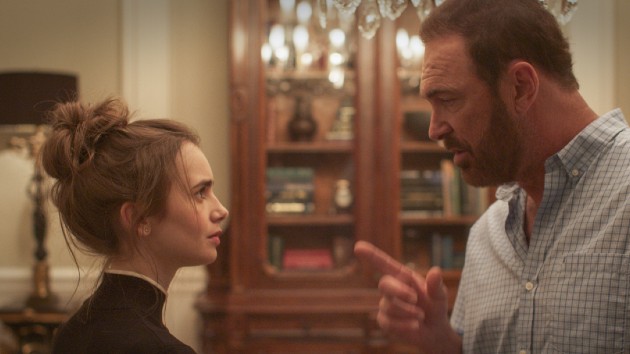 Vertical Entertainment(NEW YORK) — The new thriller Inheritance, starring Lily Collins and Simon Pegg is now available for streaming on demand. In the film, Patrick Warburton plays Collins’ father, a powerful man whose death leads her to face down his mysterious past, and a dark secret he’s been hiding.

Without giving too much away, it’s a VERY dark secret, and her inheritance is something no heir would want.

“He’s complicated,” Warburton understates with a laugh, to ABC Audio.

For the actor, who is best known for comedic turns in movies like Men In Black II, and on comedies like Rules of Engagement, Family Guy, the new Netflix series Space Force, and of course Seinfeld, Inheritance gave Warburton a welcome chance to flex some dramatic muscles.

“Well, it’s great. You know, I very seldom get the opportunity to do that. But that’s really, I find, a lot of the way things just tend to work in this industry. They see you a certain way.”

Warburton explains, “I got into this [business] because I like to do things differently, you know, and then you find yourself in the realm of mostly doing comedy or sitcoms. I always found it more more interesting and just enthralling to do dramatic material as opposed to comedy. But that’s what I end up doing mostly.”

He notes, “I’ve always enjoyed watching actors make a turn and do something interesting, you know? But they always seem to be hesitant.”

As for the film, he teases, “I felt like it was fun too, you know? It’s a good twist at the end.”