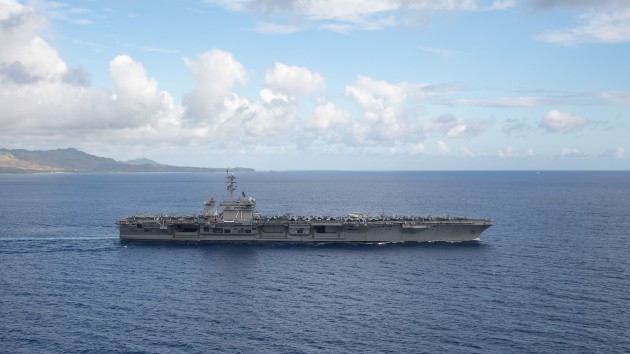 U.S. Navy photo by Mass Communication Specialist Seaman Kaylianna Genier/ReleasedBy LUIS MARTINEZ, ABC News(WASHINGTON) — A new Navy study of hundreds of sailors aboard the aircraft carrier USS Theodore Roosevelt found that one in five who tested positive for antibodies were asymptomatic, while the majority of the sailors only had mild COVID-19 symptoms.The study conducted jointly with the Centers for Disease Control and Prevention (CDC) also indicated the possibility that a small number of the tested sailors may have some form of immunity to the novel coronavirus.The carrier left Guam last week, after a 10-week interruption of its deployment to the western Pacific Ocean as the ship’s crew of 4,865 sailors was quarantined on the island following an outbreak aboard the ship. Ultimately 1,273 sailors, or about 26% of the ship’s crew, was infected with the virus, including one who died.The serology study, conducted in April, provided an opportunity for the CDC to gather the first data from a population of healthy young adults — information that has been lacking in studies of the virus.Overall the study released on Tuesday found that 60% of the 382 sailors who volunteered to participate tested positive for antibodies, indicating an exposure to the virus. Most of them experienced mild symptoms like muscle aches, fevers and chills that were different from other studies of older patients, that mainly showed symptoms like coughing and difficulties in breathing.Of the sailors who tested positive for the antibodies, 18.5% were found to be asymptomatic, a finding that is within the range of other studies.

In an interesting development, eight sailors who tested positive for antibodies 40 days after the onset of symptoms were found to still have robust antibodies that contained the virus in further lab tests. Researchers said the presence of the robust antibodies would require further study to see if they could indicate potential immunity to the novel coronavirus.”This finding may give us an early glimpse into actual immune protection against COVID-19 in young adults, having these intense environmental exposures aboard the ship,” said Dan Payne, the CDC researcher who was the lead author of the study.”We don’t really know for sure that this results in our findings are definitively indicative of immunity, however they’re a promising indicator of some degree of immunity,” said Payne. “And so, an interesting feature of this study is that it was done at one single point in time. And in order to really get the full perspective of who is developing those neutralizing antibodies.”Payne and Navy officials said the most surprising finding was that loss of taste and smell were the symptoms most associated with current or previous infection. Study participants who reported those two symptoms were 10 times more likely to be infected with the virus than those who did not, something that could prove useful in future screenings.Currently, before Navy ships head out to sea, crews are given symptom questionnaires, are tested and quarantined for 14 days before they can board the ship. Asking about a loss of taste or smell could now be added to questionnaire.”The challenge is finding those who are asymptomatic,” said Rear Adm. Bruce Gillingham, the Navy’s surgeon general. “And so understanding and widening the aperture to include the loss of taste, loss of smell, will help us.”Top Navy officials found validation in the study of the health safety procedures that have been implemented in the wake of the outbreak aboard the Roosevelt.The study found that the wearing of masks, social distancing and avoiding common areas had a significant impact in reducing the transmission of the virus among sailors. Copyright © 2020, ABC Audio. All rights reserved.