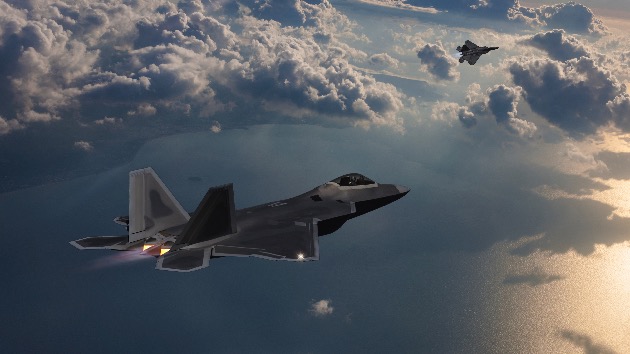 guvendemir/iStockBy LUIS MARTINEZ, ABC News(NEW YORK) — U.S. Air Force F-22 fighter jets intercepted two sets of Russian bombers off the coast of Alaska on Wednesday morning, one of them coming eight miles from entering U.S. territorial airspace that extends 12 miles from the coastline. Though the Russian bombers remained in international airspace, Wednesday’s intercept appears to be the closest to U.S. territorial limits in recent memory.”North American Aerospace Defense Command (NORAD) F-22 Raptors, supported by KC-135 Stratotankers and E-3 Airborne Warning and Control System, completed two intercepts of Russian Bomber formations entering the Alaskan Air Defense Identification Zone (ADIZ) early this morning,” said a statement released by NORAD on Wednesday.”The first formation consisted of two Tu-95 bombers, accompanied by two Su-35 fighter jets and an A-50 airborne early warning and control aircraft, which came within 20 nautical miles of Alaskan shores,” it said.”The second formation consisted of two Tu-95 bombers supported by an A-50 and came within 32 nm,” said the statement. “The Russian military aircraft remained in international airspace and at no time did they enter United States sovereign airspace.”The Alaskan ADIZ is airspace that stretches 200 miles from the coastline and is monitored in the interest of national security. U.S. territorial airspace begins 12 miles from the coastline.Russian bombers have already conducted several missions close to Alaska in March and April this year, but NORAD’s intercept of Russian bombers eight miles from that 12-mile limit appears to be the closest one to U.S. airspace in recent memory.

It is rare for NORAD to provide the distances that Russian planes come to U.S. territory in its press releases, highlighting how these intercepts were noteworthy for how they occurred so close to U.S. airspace. The first group was eight miles from entering US airspace; the second group was 20 miles from entering US airspace.Russia’s Defense Ministry posted video of the intercept on its Facebook page that showed the U.S. Air Force F-22’s flying alongside.”The flight lasted about 11 hours…at some sections of the route, the Russian aircraft were escorted by US Air Force F-22 fighters,” the ministry said in a statement that also specified which bases the bombers had flown from in eastern Russia. It made no mention of how close the bombers had come to U.S. airspace, but did highlight that in May “U.S. Air Force strategic bombers performed flights along the Russian borders five times.””Russian military planes perform all flights in strict compliance with the international rules and without violating the airspace of other states,” the ministry said.Because Russia does not have Tu-95 bombers based in eastern Russia, the bombers are flown there from bases in western and central Russia in order to carry out the flights close to Alaska.”Despite the challenges posed by COVID-19, NORAD’s remains ready and poised to defend the homelands 24 hours a day, 7 days a week, 365 days a year,” said General Terrence J. O’Shaughnessy, the commander of NORAD and U.S. Northern Command, said in the NORAD statement.”On several occasions, we have intercepted multiple Russian aircraft operating near Alaska and we will continue to do air patrols to protect the approaches to our nations,” he added. “I offer that level of detail to illustrate the point we will continue to execute our homeland defense missions with the same capability and capacity we always bring to the fight. That does not happen by luck. It happens because we taking deliberate – and at times, difficult – measures to ensure we are able to conduct our no-fail missions.” Copyright © 2020, ABC Audio. All rights reserved.