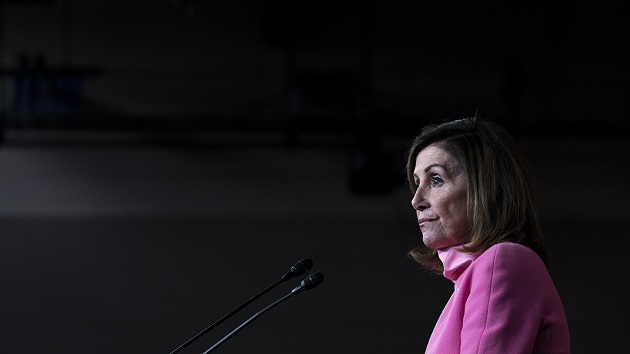 Sarah Silbinger/Getty ImagesBy BENJAMIN SIEGEL, ABC NEWS(WASHINGTON) — House Speaker Nancy Pelosi, D-Calif., on Wednesday called for the removal of nearly a dozen Confederate statues from the halls of Congress, throwing her weight behind efforts to take down the figures linked to racism and the Confederacy following the death of George Floyd.In a new letter to the Joint Committee on the Library, a House-Senate panel that manages the National Statuary Hall Collection, Pelosi asked Sen. Roy Blunt, R-Mo., and Rep. Zoe Lofgren, D-Calif., to direct the Architect of the Capitol to “immediately” start removing 11 statues of men associated with the Confederacy from display in the Capitol complex.”While I believe it is imperative that we never forget our history lest we repeat it, I also believe that there is no room for celebrating the violent bigotry of the men of the Confederacy in the hallowed halls of the United States Capitol or places of honor across the country,” Pelosi said in a letter obtained exclusively by ABC News.Pelosi’s request comes as Democrats plan to introduce a bill that would take down the statues in the Capitol — sending them to the states that commissioned them, or to the Smithsonian — and could yield the same result significantly faster.In 2017, when Democrats were in the House minority, she supported unsuccessful efforts to take down the statues in 2017, after a white supremacist rally in Charlottesville, Virginia, left one woman dead and more than a dozen people injured.During her first term as speaker, from 2007 to 2011, Democrats moved a statue of Confederate Gen. Robert E. Lee to the Capitol Crypt and out of Statuary Hall, just steps from the House chamber, as part of a reshuffling of the collection authorized by Congress.Today, a statue of civil rights icon Rosa Parks stands in its place.”The statues in the Capitol should embody our highest ideals as Americans, expressing who we are and who we aspire to be as a nation,” Pelosi wrote on Wednesday. “Monuments to men who advocated cruelty and barbarism to achieve such a plainly racist end are a grotesque affront to these ideals.”The Confederate statues are displayed across the Capitol. Five figures, including statues of Jefferson Davis and Alexander Stephens, the president and vice president of the Confederacy, are on display in Statuary Hall, on the House side of the Capitol. The other six Confederate statues stand in parts of the complex shared by both chambers.Each state sends two statues to the collection on Capitol Hill, and can vote in their legislatures to replace them.Blunt, the chairman of the Senate Rules Committee currently leading the Joint Committee on the Library, said the issue of taking down or replacing the statues should be left to each individual state.”I think the best way for that to happen would be for the states to take them back, if that’s what they want to do,” he said on Wednesday ahead of Pelosi’s letter.He noted that his own state legislature passed a measure in 2019 to replace their statue of former Sen. Thomas Hart Benton with former President Harry Truman.”There’s a process for this, and I think it’s working,” he said.Pelosi’s request would only take the statues down from display, and not remove them from the collection.President Donald Trump, who dismissed efforts to take down Confederate statues in 2017, rejected talk among senior Pentagon officials on Wednesday of potentially renaming 10 Army bases named for Confederate leaders, proclaiming on Twitter that “my Administration will not even consider the renaming of these Magnificent and Fabled Military Installations.”ABC News’ Allison Pecorin contributed to this report.Copyright © 2020, ABC Audio. All rights reserved.