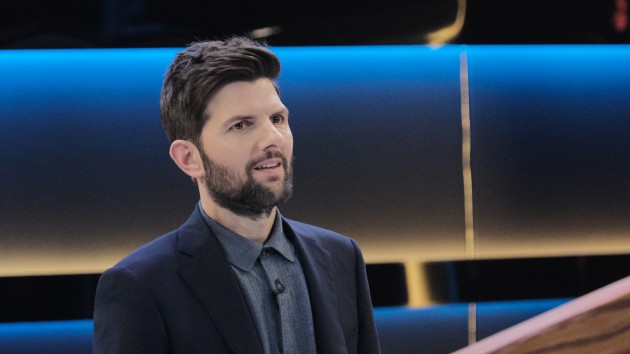 ABC/Guy D’Alema(NEW YORK) — From comedies like Parks and Recreation to dramas like Big Little Lies, Adam Scott has done it all. But when he was approached to host the new ABC game show, DON’T, he initially didn’t think he was right for the job.“I just figured if anyone’s asking me to do this, there must be something deeply wrong with them,” he tells ABC Audio. “I was just like, what? Why? Why me?”The prospect quickly went from a “don’t” to a “do” when he heard the premise for the show: he tells contestants what not to do in order to win cash prizes up to $100,000. That includes performing hilarious tasks with rules like “don’t drink,” “don’t laugh” and “don’t get tired.”“The show has this overall sort of self-aware tone to it where it’s a really fun game show that’s also sort of making fun of game shows,” Scott says. Part of that comes from Ryan Reynolds, who executive produces the show and serves as its snarky commentator. “He comes in as the ‘Don’t Master,’ commenting on the contestants, on the games we play and how stupid they may or may not be, what a terrible job I may or may not be doing,” Scott explains. “He’s just sort of there to keep everyone honest. And it’s really funny and really different for a game show.” DON’T debuts tonight at 9 p.m. ET on ABC. Episodes can also be viewed the next day on demand and on Hulu.