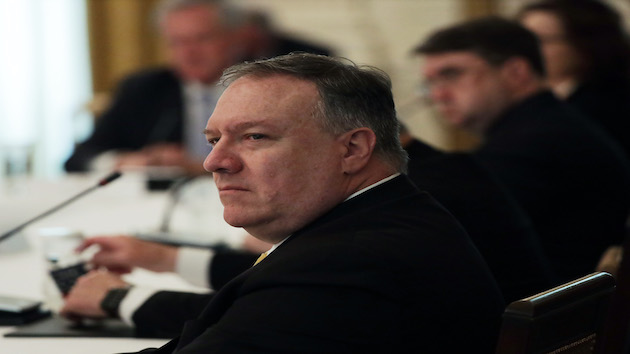 (WASHINGTON) — Secretary of State Mike Pompeo on Thursday sent a series of letters to House Foreign Affairs Committee Chairman Eliot Engel, D-N.Y., forcefully defending the removal of former State Department inspector general Steve Linick, accusing him of “strange and erratic behavior” and a “failure to perform his duties over a series of many months.”

“I need an Inspector General working every day with integrity to improve State Department operations and integrity,” Pompeo wrote in a letter obtained by ABC News. “Linick was not that person.”

Engel fired back at Pompeo later Friday, writing that State Department employees “expect more from our leaders” than his “ad hominem” attack against Linick.

“I hope you bear in mind the gravity of your position and the example you set during your upcoming final few months in office,” he wrote.

In the letter, Engel also accepted the State Department’s offer to allow Undersecretary Brian Bulatao to testify publicly as part of lawmakers’ investigation into Linick’s firing.

Linick told lawmakers in a closed-door interview last week that he was never given an explanation for his firing and was “shocked” by his removal. He confirmed that his office was conducting five investigations linked to Pompeo’s office, according to a transcript released by the panel.

Two of those investigations — into allegations that Pompeo and his wife misused department resources and the administration’s use of legal authority to sell weapons to Saudi Arabia and the United Arab Emirates over objections from Congress — were previously known.

Linick said that a senior deputy to Pompeo Brian Bulatao — an undersecretary of state for management and a West Point classmate of Pompeo’s — and other officials tried to bully him and stop him from investigating the multibillion-dollar arm sales’ agreement.

He also said he had communicated with another senior Pompeo aide about obtaining records for the probe into whether Pompeo and his wife used department staff for personal errands.

He also said he had communicated with another senior Pompeo aide about obtaining records for the probe into whether Pompeo and his wife used department staff for personal errands.

But the secretary doubled down in the letters to Engel and also said Bulatao would testify before Congress about Linick’s removal.

“I had no knowledge of this alleged work by the Inspector General at the time I recommended to the President that Mr. Linick be removed,” Pompeo wrote.

“I hear you’ve been busy in your District, so let me get you up to speed on what’s been going on with your Committee,” he wrote. The letter included a footnote linking to an article suggesting Engel is “fighting for his political survival.”