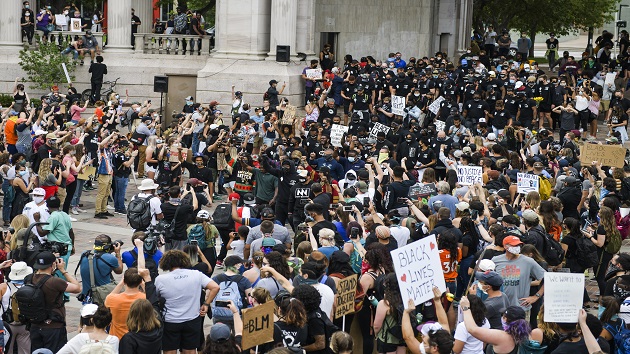 (DENVER) — For the past few weeks Sergeant Carla Havard of the Denver Police Department has been on the frontlines of protests and demonstrations, but her experience differs from the white officers she works with.“When I take off this uniform, I am Sandra Bland. When I take off this uniform, I am Breonna Taylor,” said Sergeant Havard, who spoke with ABC News’ Lionel Moise on ABC News’ “Perspective” Podcast. Badge aside as a black woman, she stands in solidarity with the demonstrators.“The same issues that they’re fighting [for], we’re along those same lines. The devaluing of black lives, the abuse of power, systemic racism. We’re still having to march. We’re still having to encourage someone to open up their eyes to see the black perspective or things from the black lense. When I’m out there, I’m like, ‘wow, we’re still having to do this in 2020,’ and that’s a shame and that’s disappointing,” said Sergeant Havard.She says it is a difficult position to be in with calls nationwide to defund the police or abolish departments altogether.  “There’s two ways that you can fix something. You can fix it from the outside and then you can choose to fix it from the inside, like myself and hundreds of other minority officers have decided to do. This system of policing, this policing machine, wasn’t designed for us. We have to be honest about that,” said Sergeant Havard.

After the deaths of George Floyd, Breonna Taylor and so many others, concern about systemic racism in law enforcement have come to the forefront. “Race is inextricably linked to the American policing system. We have to look at, and I have to look, at the history of policing and the role that it’s played, particularly in our African-American communities,” said Chief Medaria Arradondo of the Minneapolis Police Department during an interview with ABC News’ Alex Perez last week.  Arradondo has been outspoken over the years about injustices within his department. In 2007, he and four other black officers successfully sued the department for discrimination in pay, promotions, and discipline.He recently announced changes, including using artificial intelligence and real-time data to monitor officer behavior. Ridge Graham, a detective with Miami Police, told the “Perspective” Podcast ending racism in law enforcement begins with calling out fellow officers. “I think a lot of officer’s patience has run out. We’ve got to hold each other accountable. Whether that’s going to cost me my job, whether that’s going to cost me losing a couple of friends, or colleagues within the department, then so be it,” said Graham. Alonzo Hall, an officer in Broward County, Florida, says community outreach needs to be a core part of the reform, not just for optics“I feel like we’re fighting two battles. If we’re growing up in our communities and we want to make a change, we think we should do it from the inside. You think you become a police officer, [if] you want to make a change. You want to do all these things, but then you get a bad perception from your own community. It’s like you get a backlash. You get called Uncle Tom, you get called a sellout,” Hall told the “Perspective” podcast. In Denver, Sergeant Havard says her voice inside the department matters now more than ever, and change starts with the courage to speak up.  “I can tell you that those things will not happen in front of me and we need more people saying that, not only just minority officers. We need more officers period saying that. We’re talking about changing a culture that has allowed the devaluing of black lives to occur,” said Sergeant Havard.Even after the protests in Denver, and across the country end, Havard says the difficult work begins when law enforcement and the community must come together to demand change.  “I want to challenge everyone to look within and return to a sense of humanity for all and for everyone. Black Lives Matter, they should have been mattering a long time ago. They should have mattered a long time ago. Let’s just make sure it’s not a tag line. Let’s look at every aspect, because that video, what happened in Minnesota is a nationwide problem.  And that is the callous disregard and devaluing of the black life,” said Sergeant Havard.Copyright © 2020, ABC Audio. All rights reserved.

Dax Shepard reveals relapse after 16 years of sobriety during emotional podcast episode
Rural moms recovering from addiction struggle to stay connected during pandemic
Two vehicles hit protesters in LA as Breonna Taylor protests continue throughout US
Breonna Taylor decision ignites protests from New York to Chicago to Seattle
Breonna Taylor protests in Louisville: Two officers shot will recover, over 100 demonstrators arrested
How much black licorice is too much and why a sweetening compound can be bad for adults