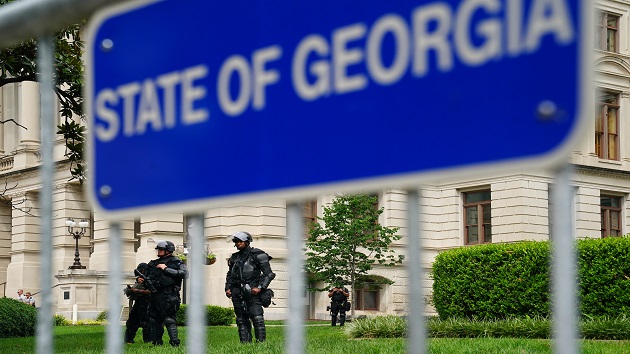 (ATLANTA) — A man was killed after reportedly being shot by an Atlanta police officer late Friday night, according to the Georgia Bureau of Investigation. Officials have identified the man as 27-year-old Rayshard Brooks of Atlanta.At 10:33 p.m. local time officers responded to a Wendy’s restaurant on University Avenue after receiving a complaint that Brooks was asleep in a parked car in the drive-thru, authorities said. After failing a field sobriety test, officers said they attempted to place him into custody. It was at that point when, according to GBI, that Brooks reportedly resisted and a struggle ensued.At that point, an officer deployed a stun gun. Witness reports, according to GBI, said that is when Brooks grabbed the stun gun and was shot by police.Brooks was taken to a local hospital where he died following emergency surgery.One officer was treated for an injury sustained during the encounter but has already been released from the hospital, according to GBI.Once the GBI concludes its investigation, the case will be turned over to the Fulton County District Attorney.This is the 48th officer-involved shooting GBI has been requested to investigate this year. Of those 48 cases it includes the fatal police-involved shootings of 15 people.Friday night’s deadly encounter with police led to large groups gathering at the scene, according to many social media videos.Atlanta, along with cities across the U.S. and the world, has been the site of massive protests following the death of George Floyd while in police custody on Memorial Day.Floyd was killed after an officer reportedly pressed his knee against his neck for nearly nine minutes. During the gruesome video, Floyd can be heard saying, “I can’t breathe.”That video and Floyd’s death sparked widespread protests again racism and police brutality throughout the U.S. Major demonstrations, including protesters taking over a precinct in Seattle, are continuing this weekend as many are calling on significant police reforms in their “Defund the Police” movement.Copyright © 2020, ABC Audio. All rights reserved.

After her child died in a tip-over accident, mom makes desperate plea to parents
Charging cows in England trample man to death in second such attack in 10 days
Rainn Wilson powered through shooting ‘Blackbird’ while his home was threatened by wildfires
Former Trump campaign manager hospitalized after threatening to harm himself: Police
Police veteran among 2 officers injured after violent incident at station
After brain-eating amoeba found in county’s water supply, advisory lifted in all but 1 area