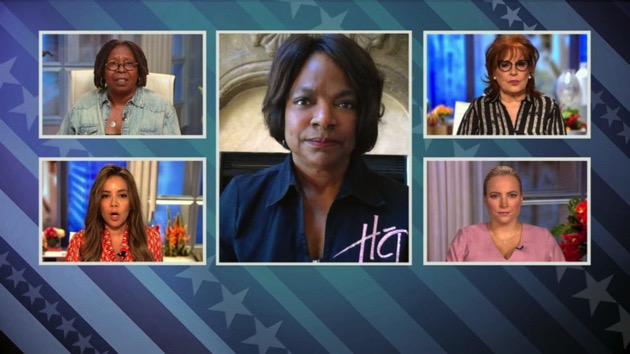 Rep. Val Demings appears on ABC’s, “The View,” June 15, 2020, to talk about the shooting of Rayshard Brooks. – (ABC News)By KENDALL KARSON, ABC News(NEW YORK) — Florida Democratic Rep. Val Demings, a former police chief in Orlando, and a current contender on former Vice President Joe Biden’s VP shortlist, said Monday the Atlanta police officer who shot and killed Rayshard Brooks did not have to use deadly force.”We saw Mr. Brooks break free and run with the Taser, but was the use of deadly force the only option that the officer had?” she said on ABC’s The View.”Based on my 27 years of law enforcement experience — experience being an officer on the street, but also supervising and managing officers through the chain of command — I do not believe that the use of deadly force was the only option that this officer had,” she said.Before being shot to death in the parking lot of a fast food restaurant, Brooks had a cordial conversation about being in the area to visit his mother’s grave and to celebrate one of his young daughter’s birthdays, according to videos released by officials.The shooting of Brooks, who is black, on Friday night prompted the immediate resignation of Atlanta Police Chief Erika Shields, the firing of the officer who shot and killed Brooks, and new protests and an arson fire at the Wendy’s where the confrontation started and then escalated into the use of lethal force.It came on the heels of days of protests in Atlanta and across the nation over the officer-involved killing of George Floyd in Minneapolis.Demings, who has risen to prominence after being elected to Congress in 2016, has served as a House impeachment manager during the Senate trial of President Donald Trump and is a member of the House Judiciary Committee.Last week, Philonise Floyd, George Floyd’s brother, and civil rights lawyer Benjamin Crump, who represents the Floyd family, testified before the committee in a hearing on policing reform.Demings said on Monday that she is “totally committed to making sure” that George Floyd’s death is not in vain, as Philonise Floyd urged during his testimony. She also implored local communities to begin making changes now to current policing policies to prevent another incident like the one that took Floyd’s life.”So, while I believe the federal government has a major role to play in setting some standards and guidelines, I also called on each law enforcement agency, I made a public appeal, to start looking within and change those policies that you can change now,” she said of the hearing.”You don’t have to wait until we’re able to get this bill — the Justice and Policing Act — through the House and through the Senate. You can look at your policies right now, and change them right now starting with banning choke holds or neck restraints,” she added.Demings was also pressed on whether Biden’s plan for criminal justice reform is sufficient to meet the demands of the moment.Unveiled in July 2019, it calls for $300 million in funding for the community-oriented policing, including funding for the Community Oriented Policing Services, or COPS, program, conditioning grants given through the program on the requirement departments hire police officers that mirror the racial diversity of the community they serve.”I think vice president is absolutely correct,” she said. “One of the things that I clearly understand, I patrolled the African American community the entire time that I was assigned to the streets of Orlando, and so I think what many people forget is that black communities want safe communities as well.””I know that there are many out there that are trying to make this and us versus them situation, like we have to choose between the police and social services. That is not the case,” she asserted.Demings, referring to comments made by former police chief David Brown of Dallas, Texas, suggested that the police have been given too wide a range of responsibilities without the proper training to confront those challenges.”What about as we fund the police department, to make sure that every community has an appropriate level of service and police response, let’s make investment into some of those social ills that cause decay in communities in the first place, like homelessness, lack of jobs, substandard housing, substandard education, health care,” she said.Demings served 27 years on Orlando’s police force and was the first woman to be appointed chief. As one of the women under consideration to be Biden’s running mate, she pitched what she could bring if she joined the presumptive Democratic nominee on the ticket.”I believe I have the on the ground experience, the credibility, and the political will and courage to get this done,” Demings said. “We know that discrimination and racism has been the ghost in the room for over 400 years, but imagine having a president who was really committed to dealing with it.”

.@repvaldemings, who is said to be on Joe Biden’s shortlist for a potential running mate, tells @TheView she has the “on the ground experience, the credibility and the political will and courage” to do the job. https://t.co/cVclFZQmjA pic.twitter.com/U9KNXxDzoL

The Florida Democrat also made clear that regardless if she is ultimately selected or not, she is committed to working along Biden to reform systemic racism in the country.”I don’t know what Joe Biden is going to do whether I’m selected or not,” she continued. “I will continue to work with him once he’s elected to make sure that we send a strong message that ‘look, you can be a racist if you want to, you just shouldn’t be in the police department, you shouldn’t be an educator, you shouldn’t decide who gets housing, you shouldn’t decide who gets jobs and wages, and we have a lot of work to do in this country but I’m looking forward to being a part of that.”But when asked why she would even want the job in the first place, particularly amid the two crises facing the nation, she joked, “You know, that is an extremely good question. I ask myself that every day.”With one of the crises, the coronavirus, sidelining the presidential candidates to a virtual campaign trail for over three months, Demings signaled that she does not think Biden’s campaign has been hampered in terms of getting his message out, even as he has mostly been confined to his house in Delaware.Biden is “playing it safe but still finding a way just as we are today to get his message out and rally,” she said, adding, “Everybody, I think people are excited.””You know, we were disappointed in 2016, but you know what we didn’t have in 2016, we didn’t have four years of the current occupant of the White House. I think people are excited and more motivated than others,” she continued.Demings also weighed into the debate over the president restarting his campaign rallies with a first event in Tulsa, Oklahoma, expected on Saturday.The rally, which marks his official return to the campaign trail since the onset of the coronavirus in March, was initially scheduled for Friday, June 19, known as Juneteenth, the anniversary of the end of slavery in the United States, but in a rare reversal, Trump announced last week that he is rescheduling the rally for the next day.The Tulsa rally is taking place as the state sees a rising number of cases of the coronavirus, which led to the Tulsa World, a newspaper in Tulsa, calling for the president to push back the rally due to the risk. Trump campaign manager Brad Parscale tweeted out that some precautions will be in place, such as before entry, rallygoers will have their temperatures checked and be handed masks and hand sanitizer.Demings praised Biden for being the “adult in the room,” and condemned Trump for moving forward with the event during the pandemic.”I commend Vice President Biden for being the adult in the room. We are in the middle of a public health crisis,” she said. “I am thankful that Vice President Biden is listening to the CDC, our medical experts and our scientists and continuing to practice social distancing. Look, he’s getting his message out. He’s held some very important virtual rallies and addressed the nation, about many things, including racism and social justice.””The president, on the other hand, obviously is desperate and worried about the upcoming election in November,” she said. “When you have to sign a medical waiver saying that you won’t hold the president responsible if you contract COVID-19, is a pretty good clue that the president should not be holding a rally. This is yet another opportunity for the President of the United States to put people first. And yet again he just can’t seem to find it within himself to do that.”She also slammed the decision by Republicans to move the president’s acceptance speech for the nominating convention to Jacksonville, Florida, after a standoff with North Carolina’s Democratic governor over restrictions to safely host a large-scale event in the midst of the coronavirus outbreak.Demings said that the president would not be welcomed in Jacksonville and suggested that he is irresponsible for putting American lives at risk.”I would say based on what medical experts and scientists say, no,” Demings, a native of Jacksonville, said. “It boils down to do you have the ability to put the people that you represent first, and as we continue to see numbers go up in Florida, why on earth would you push to have a convention here, and bring tens of thousands of people here and expose them risk their health.”Copyright © 2020, ABC Audio. All rights reserved.

QAnon’s growth mirrors sharp spike in far-right extremist violence in US: Experts
‘On the Basis of Sex’ and ‘RBG’ returning to theaters in tribute to Ruth Bader Ginsberg
DOJ announces largest drug, gun and cash seizure in darknet history
Air Force veteran aims to calm violence and help young victims in her community
We’ve hit 200,000 COVID-19 deaths in 6 months. What will the next 6 months look like?
Democrats in Arizona appealing to moderates as state’s demographics continue to change